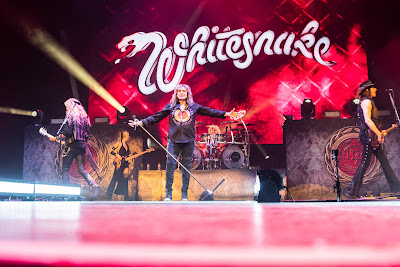 Legendary English rockers Whitesnake embarked on their UK Farewell tour with support from two other iconic rock acts, Foreigner and Europe. We sent photographer Ross Baker down to the AO Arena in Manchester on 18/5/22 to capture this night filled with classic rock anthems. Check out our photo report of this momentous Farewell tour.


Swedish rock band Europe opened the night in style and came armed with their top tracks including, 'Rock The Night', 'Carrie' and 'The Final Countdown'. British-American rock group Foreigner has been around for over four decades and has created timeless rock anthems known and loved by the masses, such as 'I Wanna Know What Love Is', 'Hot Blooded' and 'Juke Box Hero', to name just a few. All these, of course, were performed in their setlist. See them strut their stuff below! Headliners Whitesnake formed in 1978 following singer David Coverdale leaving Deep Purple. Initially, the group was to be a backing band for Coverdale. Still, they quickly established themselves as a collective entity that became Whitesnake, although David Coverdale is the only constant and original member throughout the band's history. They are best known for their mega hits such as 'Here I Go Again', 'Still Of The Night' and 'Is This Love'. They recently released their thirteenth studio album 'Flesh & Blood' in 2019, which was critically acclaimed and included plenty of hefty anthemic tracks to add to their impressive catalogue. For their set they stick to their older classics mostly, as expected. Check out their final performance in Manchester in the photos below: For more on Europe: https://www.europetheband.com/ https://www.facebook.com/europetheband

Words by Carina Lawrence
Photos by Ross Baker exclusively for Mad About Rock.
To see more photos from Ross head to https://www.instagram.com/seethemusic___/