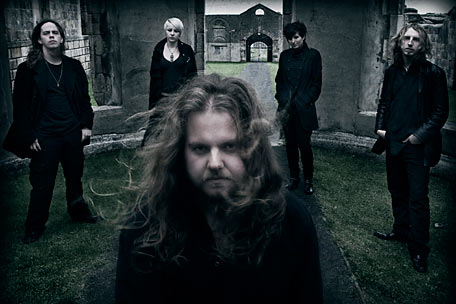 Darkest Era are a celtic metal band from Northern Ireland, although not just strictly celtic metal as they have other genres mixed in to create their epic sound. The band signed with the mighty Metal Blade Records back in 2010 and released their first full length debut through the label, the brilliant, "The Last Caress Of Light".

This band is one to look out for! They have recently just finished a 14 date tour with 'pirate metal' band, Alestorm and Australian folk metal band, Claim The Throne on the "Useless Drunken Bastards" UK and Ireland tour in February 2012.

I was lucky enough to witness all 3 bands in action on the 14th of February in Brighton at The Haunt. If you haven't seen Darkest Era or heard their music, you best do it now!


I asked guitarist, Ade Mulgrew about touring with Alestorm, live shows, signing with Metal Blade Records and what the future holds...

So I saw you at The Haunt in Brighton on the February 14th , and thought you were brilliant! How was the gig for you? I thought you went down really well with the crowd!
It was a lot of fun actually, one of the best of the tour. Sold out shows always bring an extra buzz and the crowd responded really well to us. We had some friends down at that show too which made it a bit more special. Brighton seems like a really lovely place so I wouldn't mind going back for another visit. But yeah, the crowd really got into it and we sold plenty of merch so can't really ask for more than that!

What was the best show you played on tour with Alestorm?

It's a tough call, the tour was full of fantastic shows. Brighton, Sheffield, Leeds, Manchester, Wolverhampton were all amazing, but I think London was probably a personal highlight. It was a great achievement for Alestorm to sell out such a high profile venue but being our first London show since the album came out, it was special for us and our label had brought down a lot of press and so on to the show. We played really well I thought and again the crowd reaction was fantastic. We got acquainted with some of the label guys and we all got horribly drunk together afterwards so I'm going to have fond memories of that show for quite a while! Having a pint with Bill Steer of Carcass afterwards was also another highlight.

I bet the tour was full of drunken tales and funny stories..have you got any particular funny highlights you can think of?

There were indeed, though one of the things I discovered was that after a handful of shows, you start to sort of operate in your own little world with the touring party so a lot of the fun stories wouldn't make sense out of the context of the tour. Stoke was particularly memorable for drunken debauchery but I really can't describe why...lest to say 'ice penis gigantic trunter ugly naked tits vomit brawl..'

I read that you don't like to be branded just as a Folk Metal band, which I think is quite right, as you don't strictly sound like one! You have a bit of a mix of celtic, folk, and even a hint of prog metal..how would you best describe you sound?

When asked to describe it, I guess you can be convoluted and say something like epic, stormy heavy metal with celtic folk melancholy woven throughout with traces of influence from black and doom metal. In terms of a genre, it's heavy metal..pure and simple. The music has the raw spirit of heavy metal in it's truest form, or at least we think so.

For those who haven't witnessed you live, how would you sum up your performance?

Energetic, engaging, powerful I guess. When we stand on stage we really try to connect with the audience and convey the emotion in our songs on some sort of level; and also just generally put on an interesting and entertaining heavy metal show.

So you used to be called Nemesis, what made you decide to change your name?

There were 17,000 bands already called Nemesis. We needed something original, something more reflective of the music we had begun to write. Darkest Era is that.

How does it feel to be signed with such a prestigious label (Metal Blade Records)?

It feels great, we certainly count ourselves lucky and they have been nothing but positive and supportive so far. We've built a solid relationship with them in our short time on their roster and we're looking forward to our future with them. I don't think we could hope for a better label to be signed to, to be honest. They have enough faith in us to give us free reign to what we like creatively and that means a lot.

I imagine the deal with the record company, as-well as touring with the mighty Alestorm must be highlights of your career..What other goals would you like to achieve as a band?

I suppose releasing our first EP on Eyes Like Snow, a small German label, was one of our first big milestones. They signed us up exclusively for that EP and to get some sort of label support that early on in our career meant a lot to us. Our first European festival shows in Germany and Greece were other big highlights, especially considering the reaction we got. And I guess also playing to a sold out crowd in Dublin for Primordial's DVD recording was a big moment for us; not just because Primordial are such a great band but because it was a milestone in the Irish metal scene, to have 800 people at a prestigious venue for a bill made up solely of Irish bands. It was a great moment.

You have already started of 2012 on a high note, what's in store for the rest of the year and the future?

We have a few more shows lined up and we're hoping to announce a few dates over the summer. We're also just about to announce a vinyl release for our album, which is fantastic. Apart from that, we are into writing for our second album which is the main thing we are excited about at the minute. We've already done demos of a few songs and we're really looking forward to developing our sound and writing more songs, so hopefully we can make announcement about when we will be recording etc in the next month or two.

Thank you very much for your time! I really appreciate it!

No worries, any time!

Check out their new video for, 'An Ancient Fire Burns':﻿﻿http://www.youtube.com/watch?v=wnr8KQ5eCzQ&feature=player_embedded
http://darkestera.com/