MammothFest returns after four year break bringing Brighton back its only dedicated metal festival! Today sees the first announcement of headliners Savage Messiah and Martyr Defiled, along with main support Meta-stasis and Ingested announced At early Mammothfest Ticket Cost which can be purchased here: http://mammothfest.bigcartel.com/ This reduced ticket price is for a very limited time only.  ‘Early-Mammothfest’ tickets are now on sale at just £15 for a pass to both incredible days.  The price is due to rise on announcement of the next set of acts in about a week’s time with 18 more acts to follow!

The First MammothFest saw the likes of Emtombed, Sylosis, Malefice & more wreak havoc in the South East of England and went down a storm so the resurgence of the festival is much anticipated!

Festival organiser Steve Dickson had this to say about the Festival's comeback:

“The interest in Mammothfest was significant from the moment I announced this years event. I have had so many messages of support and appreciation. I want to again shine a light on the amazing local bands while bringing the best bands in the world to Brighton”.

The announced bands are looking forward to being part of the mighty return also with Savage Messiah saying: "We're really excited to announce that we'll be headlining this years Mammothfest! This will represent our first ever festival headlining set on English soil, and we shall be pulling out all the stops to make this an extra special event! Whilst main support act Meta-stasis had this to say, "It was a total honour to play Mammothfest in 2010 with Ted Maul as it will be to play in 2014 with the depraved Meta-stasis. Brighton: wake the fuck up!!

It is set to be a weekend of intense and serioulsy heavy music which is not to be missed! Get tickets now at discouted price and don't miss out! See all Festival details below and look out for the next announcement! 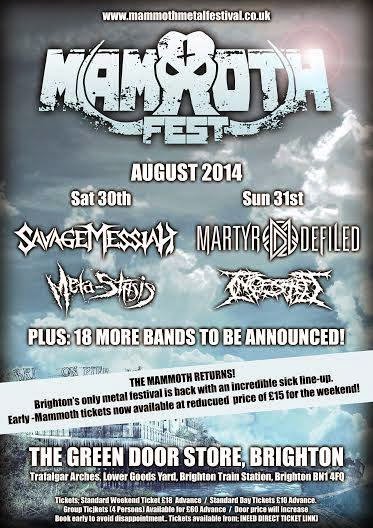