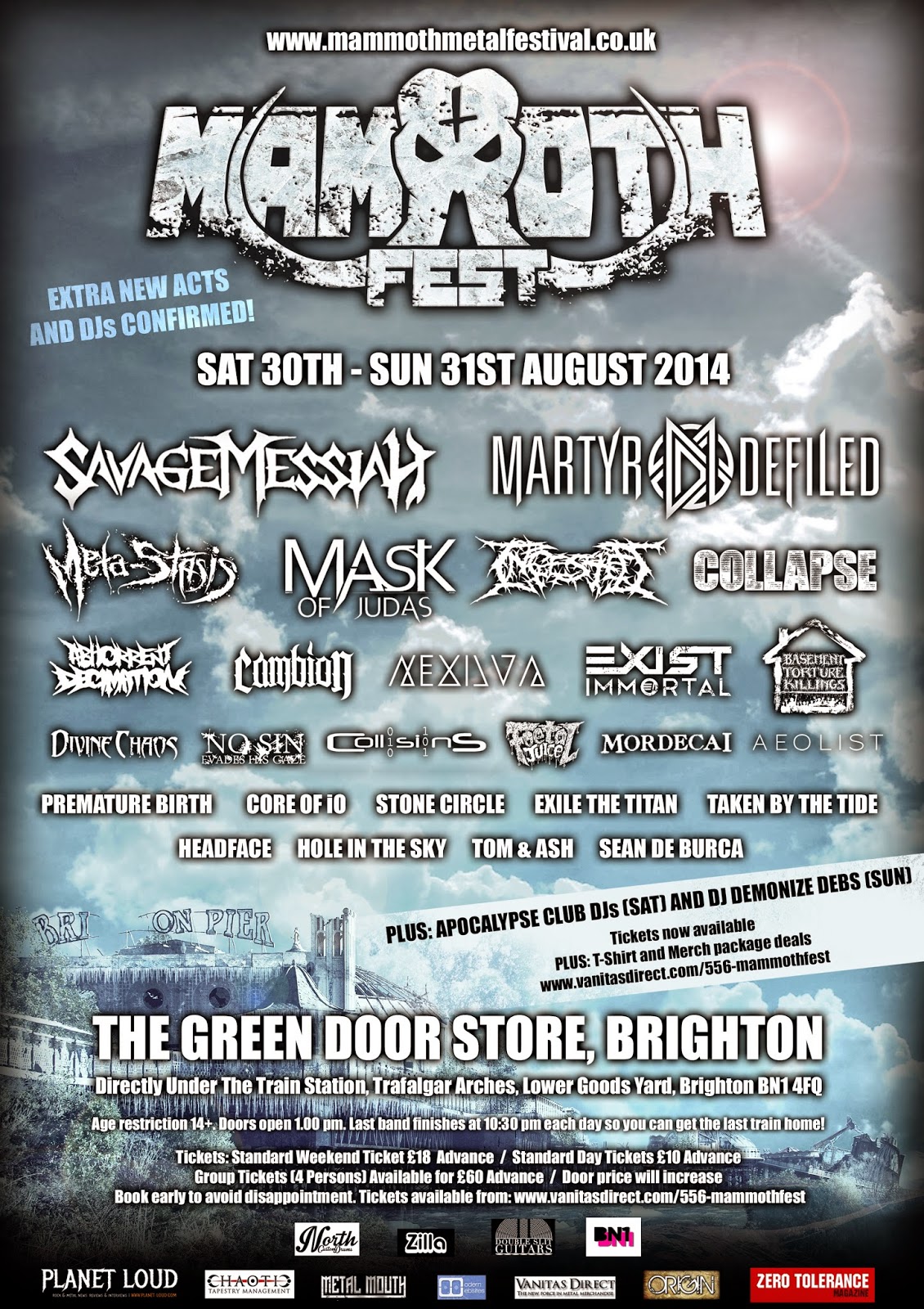 Brighton's heavyweight intense festival, MammothFest has today released some new announcements, including a shock surprise of two extra acts, to what was meant to be a full bill! (see full line up above). The two extra acts are Acoustic duo Tom & Ash and Acoustic virtuoso Sean De Burca who will perform as part of the weekend.
Organiser Steve Dickson was so impressed by them both at recent
shows that he walked up onstage to offer them spots as soon as they finished their gigs! That is quite a compliment and means attending festival goers are in for an even more epic time! (See links and video below to check out new acts added!)
﻿

If that wasn't already exciting enough MammothFest have also announced a Apolcalypse Club Night DJs playing on the Saturday between bands and DJ Demonize Debs on the Sunday. So even more reason to get down to this mighty event!

Also some of the bands featured on the line-up have been busy creating new music and videos which they have unleashed upon us, from the likes of Saturday 31st's penultimate band Meta-Stasis, who have released their first ever video for 'Fathomless' (which is also currently my featured video of the week on home page - so worth watching!) and Progressive metallers, Stone Circle have released a much anticipated new song/video for 'Easter Island', check it out here:


It's all getting a bit crazy now so hurry up and get your tickets while you still can here: http://www.mammothmetalfestival.co.uk/
See below video from new act just added of guitar virtuoso Sean De Burca! Impressive!
﻿
Bands featured Links:﻿


Cellar Darling is comprised of Anna Murphy, Ivo Henzi, and Merlin Sutter who recently formed following the spilt from previous well-known folk metal band, Eluveitie. The trio have been hard at work since, creating their anticipated debut album 'This Is The Sound' which was released June 30th via Nuclear Blast Records and have impressed fans and press alike with their fresh and unique sound which has been dubbed as "the new wave of folk rock“. This is an exciting and busy time for the band, so I caught up with them to find out about their origins, their new album, touring and what is in store for the band amongst other things..

Can you tell us about the formation of Cellar Darling following leaving your previous band Eluveitie and how the band came to be?
Merlin: What I remember most clearly is how quick it went. As you might know, the whole thing with Eluveitie came very unexpected for us - we were informed of a decision by the remain…
Post a Comment
Read more

December 31, 2017
Modern metal quartet Spreading The Disease from Kent, UK formed in 2014 and then earlier this year in September 2017 they finally unleased their debut album ‘Insurrection’ which shows they are ready to infect metalheads and critics alike with their no-nonsense sounds…
Opening song ‘Find My Path’ starts with a melodic and resonant intro before fierce vocals come in with hard-hitting heavy guitars, it then goes on to feature an effective stripped back section towards the end which gives it extra depth. This is a powerful and strong start to the album.
‘Words Unspoken’ is a thumping tune with great rhythms and is very headbang worthy and incredibly catchy, keeping up the momentum is self-named track ‘Spreading The Disease’ which immediately pulls you in with catchy melodies and is all consuming with mighty riffs and a massive aggressive sound.
Latest single ‘Greed’ is frantic and driven and features some of the best guitarwork so far and again is very belligerent and is bound to get the mos…
Post a Comment
Read more