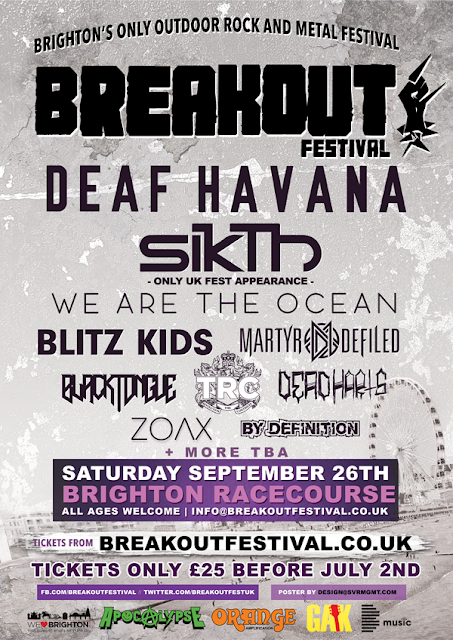 
Deaf Havana, We Are The Ocean, Blitz Kids, Zoax and By Defintion are confirmed to be joining the already diverse line up of Breakout Festival 2015. This next wave of announcements brings an epic rock edge to the devastatingly heavy line-up which already includes SikTh, Martyr Defiled, Black Tongue, TRC and Dead Harts. This huge line-up, with many more to be announced, will take to the stage on 26th September 2015 at Brighton Racecourse.


Festival director Stefan Curzon-Price said: “This year is all about further establishing Breakout as THE outdoor rock and metal festival for the south east; one that caters for the wide range of tastes that exist across what is already a very united but diverse live music scene. Our first announcement was all about the heavier bands, including a UK festival exclusive; this announcement brings a set of epic rock acts to celebrate the most diverse community led genre in music.”


Initial early bird tickets for this year’s festival sold out on the day of release and the next tier continue to outsell the previous festival many times over.


Aspiring musicians will again have a unique opportunity to share the stages with this incredible line-up, by taking part in the “Headliners Choice” award and a public vote competition. Applications are open until 1st June and bands can visit http://bit.ly/1K9lCQn to apply.