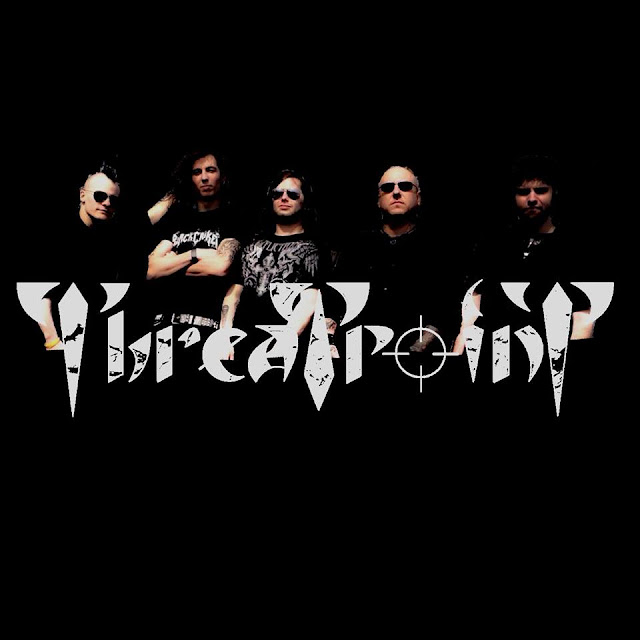 Threatpoint is a groove metal band based out of Scranton, Pennsylvania pulling influences from all of the rock and metal spectrum. I caught up with them and asked them about their sound, influences and the future, including their third album which they are currently working on, so be sure to read all about it and check out their technical groove metal!..


For those that aren't familiar, how would you describe your music?

Groove metal, simply put. We don't focus on technique or ability... just what we think is good song writing and what would move a live crowd.


What would you say are your biggest influences, creatively and musically?

We all grew up with a passion for music and playing music. Between all of us, bands like The Doors, Iron Maiden, Metallica, Megadeth, Testament, Sepultura, Pantera and Devildriver to name a few... you can't help but be influenced by what you listen to


So you recently parted ways with your bassist, Eric Ross and welcomed Matt Van Fleet (formerly of Cause Of Affliction) as the new bass player, how are things going so far with Matt? How did you cross paths with him?


Things are great with him... he actually had a hand in the formation of this band as he is the one who hooked up Chris with Alex and myself. We've played several shows together when he was in COA and we always kept in touch. It always felt like he should be a part of this.


Following on from that, how would you say the new line-up change has affected the band and it's dynamics, if any?

Matt is an absolute bass player to the fullest extent. We've had some guys who would play along wit the guitarists and just be content with being in the background but Matt will add something or take away if he feels it... he serves the song no matter what. He always makes it a point to lock in with the drums too, which obviously helps as bass and drums are the foundation for a song.


Have you begun work on your follow up to 2014's "Careful What You Wish For" album yet?

We have and we are! We're currently scheduled to go back to the studio within a month... just honing some things in and fine tuning them.


How happy were you with how "Careful What You Wish For" turned out, and how it was received?

It was a pain to make for sure but when it's all said and done, it was totally worth it... we still get great feedback on it nearly a year later and the songs from it are still fun to play live.


How do you think your new material will compare to your previous releases? If it's not too early to say!

A bit different for sure... while Dead to Rise was our first album and basically was just us throwing something at the wall and seeing what sticks (being it was our first time writing together) and Careful was definitley more amped up as far as direction, style and skill go, this third album will focus on some more dual guitar player type playing as we've never properly wrote with two guitars playing together and feeding off each other before... and of course, we've still got plenty of bone crushing type riffs and grooves.


You are currently touring and will be right through to early 2016, how are you enjoying it so far?

I'm answering this now as we are headed to our last date in St. Louis on our tour headed west. We love it, man... the travel can be absolutely brutal and exhausting but to meet new people and turn them on to your product is priceless.


What can attending fans expect from your live shows?

Be ready to move... move or be moved, as we say! We are a live band and pride ourselves on that, so we always love and appreciate some crowd interaction and participation. We love a good mosh pit!


If you could tour anywhere in the world, where would it be?

We are currently in talks to go to the UK next year... that is all a huge dream for all of us.


What else is in store for Threatpoint for 2015?

Recording our third album first and foremost, along with a few live shows here and there. For the latest, always check out threatpointofficial.com