"Expect something in there from almost any genre you can think of laid over a constant theme.." 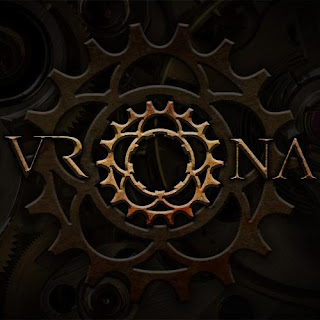 Vrona from Brighton, East Sussex, UK are a diverse textured progressive instrumental act to keep an eye on, after seeing them myself live at this year's Mammothfest in their hometown I caught up with guitarist, Jack Baker to ask about how the festival was for them, how they came to be and much more!


Firstly you have an interesting band name, can you tell us how this came about and what it means?

Sure! It essentially came around by the idea of not wanting to be limited by our name, if a band called “Daisy and the Chitty Chums” put out a pornogrind album it’d just be weird, same story with a band called “Guttural Decimation” throwing out a jazz-funk album, so in that sense having a fairly open ended name like Vrona appealed, especially with the groggy weird nature of what we do where we could put pretty much anything in the middle of a song and it wouldn’t be a huge surprise. Leading on from that though, Vrona is a loose translation of a kind of bird from Polish, I think it might be a crow with the basic idea being that a bird can look down and see something new every time it passes over a city because of its view, there’s always something changing. That’s basically the aim of our sort of stuff, to have such massive textures with layers spanning for miles that you can listen a hundred times and still notice something that’s fresh and exciting.

You formed as a band only last year, how did you all come together to create Vrona?

We all met at random intervals at university, I was in a lesson with Connor, I met Mat before we even started uni at some party, and me and Dan met through playing a Placebo tune for an exam at some point… it ended up with me needing ears on a song I was writing, getting Connor over, then about a week later Mat asked me if I wanted to jam. Connor got dragged in to that and Dan got a phone call at 2am from me and Mat because… well, he was the best drummer we knew that could do the stuff we were thinking of!

How would you best describe your music to those who are not familiar?

Proggy, ambient, rhythmical weirdness that gets brutally heavy because we love it. Also expect something in there from almost any genre you can think of laid over a constant theme because… well, there’s a lot we listen to and love!

Your debut EP, "A Lapse in Time" was well received, what was the recording and writing process like for this?

Stressful and time consuming! The writing was fairly natural really, two of the five tracks were old ideas from Jack’s laptop that we all tweaked and made a bit more “us”, and the others were written in a room jamming away. It all came together naturally in the end but the initial month or two of trying to write this kind of music together, where we’re still feeling out each other’s strengths and weaknesses as musicians/establishing a musical dynamic was stressful and straight up demoralising at times, but ridiculously rewarding in the end. Recording was all a blur, tunnel visioned and the single most time and energy consuming thing I think any of us, especially me and Connor, have ever done, but the end product is something we’re stupidly proud of!

What is the most challenging thing about creating new material?

Just the nature of what we do means that writing anything takes absolutely forever, and we get so bored so easily that we’ll spend an entire day messing around with an idea in as many ways as we can, throwing different rhythm phrasing at it, different beats, different layers on top… writing something under 7 minutes is a struggle in this band!

So you have been busy touring and playing festivals this year, including Bloodstock festival UK on the Jager stage in the summer, how did this feel to play such an established popular festival, and what was the reaction like to your set?

Bloodstock was a complete head trip. After every gig we sit there and rip in to each other for a good 20 minutes about what went well and what went wrong so we can improve but after that we just sort of sat there in a stunned silence which should let you know what the reaction was like! I start the set with my head down so flicking it up and seeing a rammed tent was a shock and a half. If there’s any footage you’d probably be able to see me do a little jump! The entire day leading up to our set though was basically me and Mat sat around breathing heavily, somewhere between the most excited we’ve ever been and wondering if we need to run to a grotty festival toilet.

Speaking of festivals, most recently earlier this month (October) you played a sold out show at Mammothfest in Brighton UK on the Rikstock stage for emerging artists, how was this for you, especially knowing it had sold out?

Mammothfest was another highlight of the year, the amount of work everyone on the team puts in is absolutely unbelievable for no reward at all other than gratification, and knowing it had sold out thanks to their efforts is great, especially with the kick it’s given Brighton’s metal scene. The crowd were awesome too, tonnes of energy in the room for 2:15 in the afternoon!

How was the overall festival for you and who else did you enjoy seeing on the line-up?

The festival as a whole was incredible, and personal highlights for me at least, were Venom Inc, Hell Puppets, King Leviathan and Conjurer. The latter three are in my honest belief, the best bands on the UK underground circuit at the moment, every time seeing them is like some sort of religious experience! Special mention HAS to go to Eastern Front though… honestly, how people so lovely and happy can put out such a venom filled stage show is beyond me, I’m 99% sure my brain is still splattered somewhere over the back of the Green Door Store. Fucking incredible.

As a band that hail from Brighton, how crucial do you think Mammothfest is to the local and South coast music scene?

Crucially crucial! It’s given the scene such a massive kick, and year on year it’s growing at a rate that means soon underground bands such as ourselves could be on a bill with some of the biggest bands in the world, nobody does as much for the metal underground as people like Steve from Mammothfest and Simon Hall from Bloodstock, but Bloodstock is all the way up in Derby, having something that the Southern bands can get to easily is amazing!

Following on from this, how important do you think it is for smaller bands to have the opportunity to play at festivals amongst well known heavyweight bands?

I’d say it’s important in the sense that it puts you in front of a large crowd and on a bill with bands that could well love you and plug you on their own pages, case in point being Tony Dolan from Venom Inc. He absolutely adores Hell Puppets and is forever telling people about them! It’s not the most important thing in the world, you can still get your music and brand out to people with hard work anyway, but it’s definitely something to aim for, and a massive opportunity when it does happen.

You are currently an instrumental act but I hear you are thinking of possibly getting a vocalist, is that correct?

"To a degree, we're not looking for one by any means however it's been something we've never ruled out if someone was interested and fitted the music, sure why not!"

Are you currently working on any new songs?

Yeah, but it’s a long, slow and sometimes very painful process. The cathartic release is second to none though, we’ve got no idea when it’ll get released, but it won’t be until we’re 100% satisfied!

What else is in store for Vrona this year and the near future?

Writing for the rest of 2016 with a show in December so we don’t forget how to play the material from “A Lapse In Time”! As for 2017, plans are starting to be put in place, nothing we can say yet but it’s just a bit bloody exciting….

Is there anything else you would like to add?

Thanks for the interview, sorry for waffling on, thanks to Mammothfest for having us and all their hard work in making it a sellout, and don’t eat yellow snow!

Be sure to check out their music and keep updated on any news: