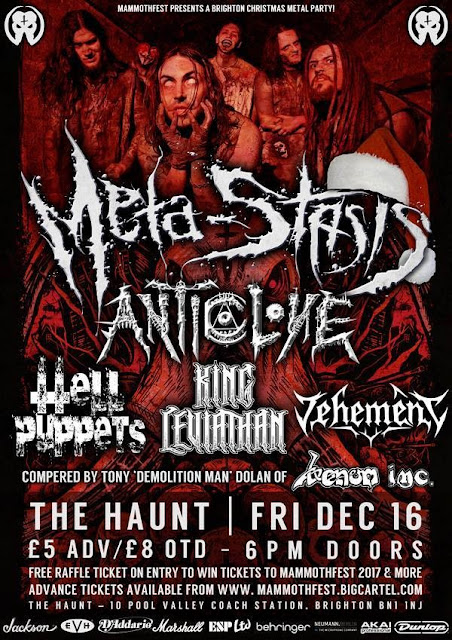 Come and celebrate on the 16th December!


Following the success of this year’s Mammothfest in October it has since been nominated for three festival awards, including the UK Festival Awards in two categories, Best Metropolitan and Best Small Festival 2016 as well as the TBFM Best Independent Festival 2016. The winners are yet to be announced so watch this space!

It’s no surprise the festival has got people’s attention, as this year marked the biggest event yet, with higher capacity venues and well known bands, Textures, Venom Inc and Conan headlining, amongst the many other underground and rising stars of rock and metal that took to the stage across popular Brighton venues over one mighty weekend, and for its efforts it was almost an complete sell out! Now Mammothfest is inviting you to their special Christmas party which will be a hell of a show! So come and celebrate and enjoy the mental line-up!

The event itself will be held at The Haunt, Brighton on the 16th December, and it will be hosted by a member of one of the headlining bands this year, being none other than the Demolition man, also known as Tony Dolan, of Venom Inc, who it is fair to say is quite the supporter of Mammothfest, as he recently got the Mammothfest logo tattooed on his neck, so he is the man for the job!


First up we have Meta – Stasis, The south’s very own Jungle tech death metal lunatics are back to headline The Haunt, following two tours of India supporting Behemoth and Korpiklaani. On top of that, Meta - Stasis utterly destroyed their set at Bloodstock this year! The band is deep in to writing number album three, but the guys are more than happy to take some time out to party with us and show Brighton what all the fuss is about.

Anti-Clone also RUINED Bloodstock this year and continue to make incredible progress with their 90s nu metal style madness, with laden with incredible grooves and delivered with a vicious attitude. Musically, they can be compared to the likes of American Head Charge, though Anti-Clone also have a look that’s as striking as their sound. Using face paint and creepy masks in a tone that is strongly inspired by the likes of Marilyn Manson and Rob Zombie. Anti-Clone performed at Mammothfest 2015 and we are once again overjoyed in having them back in Brighton.

Mammothfest regulars, Hell Puppets, are another band that made the most of their Bloodstock opportunity by kicking as in 2015. Horror punk with a metal attitude that is fun yet also terrifying. Hell Puppets are not for the faint hearted, their look is strongly Wednesday 13 meets Murderdolls vibes and their demeanour is one to shock any audience. Expect blood and carnage as the band throw themselves around the room like possessed demons.

King Leviathan, who are fresh from delivering one of the more memorable sets of this year’s Mammothfest. The Sussex men have been in the studio to record some of their best material to date as well as playing shows left right and centre, creating chaos in their wake. The Blackened Thrash band are ready to take 2017 by storm, but are worshiping the old gods one last time in 2016 with us at The Haunt. Dare you join them in worshiping the old gods during their dramatic black thrash mass?

Finally, to kick the night off with no holds barred brutality, we have Vehement. Blistering black metal that has been destroying every venue it comes across. The south coast metallers have also been working on a new album, which we can expect to hear plenty of new material in their last show of 2016.

2016 has been great for us and we want to finish this year with a bang. We have plenty of great things planned for 2017. Keep your eyes peeled for more events in the New Year! We hope to see you there to party and be merry with Mammothfest! 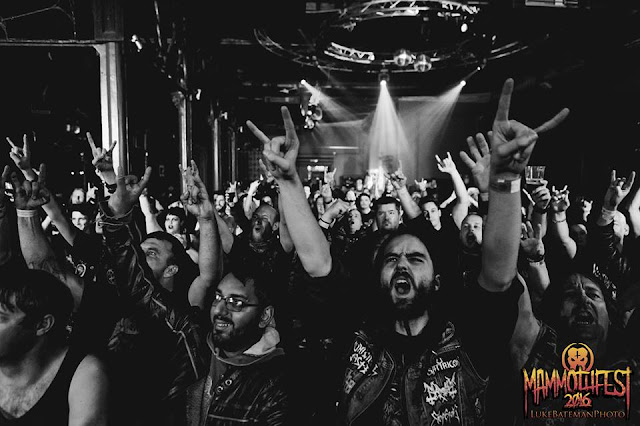 About Mammothfest:
Mammothfest is currently an indoor hard rock and metal festival, set in various venues in the seaside town of Brighton, UK across the weekend with different genre stages. Now in its fourth year where past bands include: Onslaught, Textures, Venom Inc, Conan, Ingested, Martyr Defiled, Entombed, Sylosis, Orange Goblin, and many more. Mammothfest has grown from a couple of single venue all-day shows to the multi-venue event it is today and will only continue to expand.
For more information:

The site is currently being redesigned so keep an eye out for the new look coming soon at: http://www.mammothfest.uk/