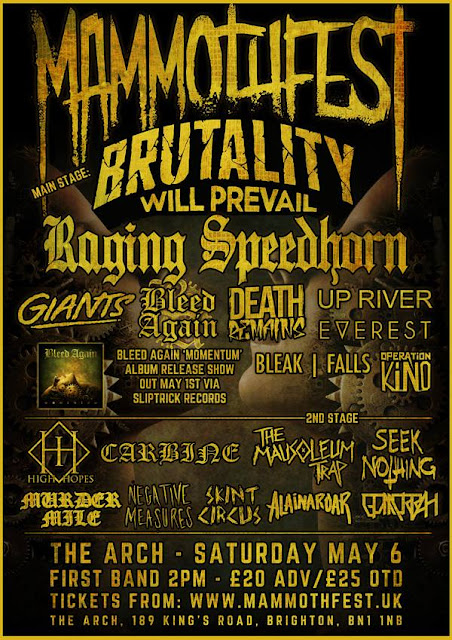 Mammothfest are making quite the impact already in 2017, with two announcements out for the main event taking place on the 6-8th October at The Arch, Brighton, which includes headliners Rotting Christ (with more to be announced). Now they continue to please with this latest Mammothfest show, the second one of the year, with the first being held on the 1st April with headliners, Feed The Rhino. Find out more about this massive show below...

Worthing metallers, Bleed Again have become Mammothfest favourites in recent years. So, to celebrate the release of the band’s album, “Momentum”, Mammothfest have set up an event to make the occasion even more special.

The event will take place at Brighton's Arch venue on May 6th, the same venue that Mammothfest 2017 will be held in October. The album launch show will be an all day showcase, giving you a choice of 17 bands spread across two stages.

Brutality Will Prevail, commonly known as BWP, is about to release their highly anticipated fifth studio album, “In Dark Places”. This will be the band’s second album to feature Louis Gauthier on vocals, formally of popular Brighton-based hardcore act Breaking Point. The Welsh outfit is known for producing a unique style of sludge-hardcore, adding it the energy and aggression of metalcore. More importantly BWP deliver some of the best pit-starting grooves in UK hardcore. Expect a high- octane show.

Formed in 1998, Raging Speedhorn has a lot of experience under their belt as the band quickly established itself as a major presence within the UK's metal scene early on into their careers.The band's first single, "Thumper” was released in 2000, which received significant critical acclaim, then in 2001, Raging Speedhorn charted in the UK Singles Chart with "The Gush". As the main support to BWP, you can expect pounding bass lines and heavily distorted riff-thick riffs, all unleashed with a punishing effect.

Hardcore-punk outfit, Giants, which will follow an extensive European tour with Polar. The Essex and London-based punks released their debut album, “Break The Cycle” in 2016. The album pulled in praise for their fresh take on delivering a mixture of brutal nature and catchy hooks, unveiling influences from the likes of Bad Religion and Pennywise, to Comeback Kid and Gallows.

Bleed Again, the men of the hour who will be releasing their album, “Momentum” on May 5th. Bleed again are Brighton heroes and fan favourites at Mammothfest. In 2016, Bleed Again delivered one of the most memorable sets of the weekend, in which they filmed their latest song and video for the melodic “Through The Eyes” and earned them one of the best crowd reactions of the whole festival. Having already supported the likes of Soil, Darkest Hour and Devil Sold His Soul with their reputation for blistering live sets, you don’t want to miss them.

Headlining the second stage is High Hopes from Reading UK. Since forming in 2012 they have become an unstoppable energetic live act, which has seen them share the stage with well-known acts such as  Heart Of A Coward, Skindred, Emmure, Stick To Your Guns and Deez Nuts, as well as touring the world, across the UK, Europe, USA, Canada, Japan and China, building a dedicated fan base in their path wherever they go, making them a very worthy headliner indeed!

All these bands plus more! (see poster above)

This massive show strongly highlights Mammothfest’s statement to bring the biggest bands to Brighton whilst giving the local acts a platform to grow and play amongst established acts, especially in this extra special event that marks the album launch of one of the most exciting UK upcoming acts Bleed Again! Come and celebrate Bleed Again’s new release and join in this mental party of big and smaller bands united as one all under one roof at The Arch which is the perfect location being central and along the seafront. You don’t want to miss it!

To get tickets to this massive event go here: https://mammothfest.uk/product/brutality-will-prevail-raging-speedhorn/ Hurry as limited amount of early bird tickets at just £18!

For more info on this event plus all other Mammothfest shows and tickets visit: www.mammothfest.uk