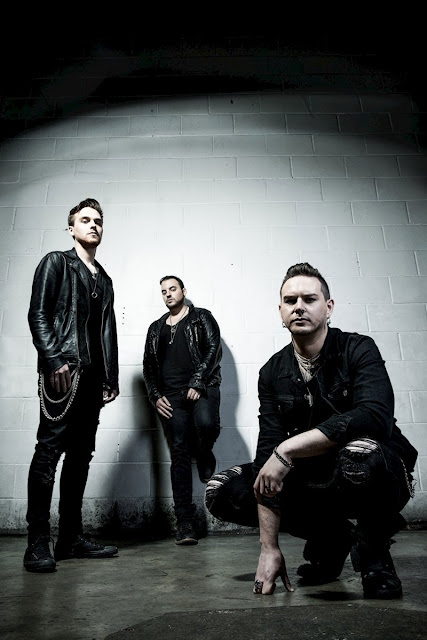 Brighton rock trio have just unleashed their sophomore album 'DeaDHeaD' which is going down a storm with rock fans and press alike and they have quickly established themselves as a rising rock band to look out for and as a result, they have secured festival appearances this summer at Ramblin’Man Fair, Wildfire Festival and more. The band are currently on their UK tour supporting the album so I caught up with vocalist/guitarist Nikki Smash to discuss this, the new album and more...

Can you tell us about your formation?

We all met in college and all shared the same drive, passion about being in a Riff/Grunge Band outfit and when we formed Indie was huge and we hated it and almost wanted to get rid of it, haha! We were all session musicians and weren’t enjoying that so we decided to make the plunge and started the band!

How did you come up with your band name?

I was watching MTV2 or MTV rocks really late at night one of those I’m not going to sleep tonight, nights. Ricky Rocket from Poison was on a red carpet with a load of models everywhere as they do and was saying “These are my rocket dolls baby” all that type of thing and it just pricked my ears up and I thought “The Rocket Dolls, sounds like a quality band name”.

You have a strong grunge sound mixed in with other genres, what are your main musical influences?

I’m (Nikki) are influenced from Nirvana, Big Wreck, Thornley, Bush, Soundgarden, Stereophonics. Benji is influenced from Blues legends like ‘Bernard Purdie’ and Alice In Chains, Nirvana, Killing Joke, Paradise Lost, Nine Inch Nails. Joe is influenced from bands like Reuben, Mastodon, Nothing More, While She Sleeps. We are also influenced by each other and sports personalities like Anthony Joshua, Jenson Button and anyone who is proving things wrong and no matter what getting back up winning, succeeding. It is inspirational.

Your second album ‘DeaDHeaD’ which is brilliant by the way, is out on April 6th, what can fans expect from it?


Firstly, thank you that means a lot. It’s extremely personal but very relatable pretty much everyone who has heard has said how powerful the subject matter is and how its already helping them through their daily struggles with depression, anxiety. That is amazing and hopefully the message and subject can help more!

Can you tell us about the writing and recording process for the album?

I wrote the record pretty quickly, when I was going through a few things as was Benji its sounds cliché however but it just all came together and when we went back into the studio with ‘Mark Roberts’ the process was rewarding and again it just all came together it took time as we went through a few member changes in the bass department which meant myself (Nikki) and Mark Roberts had to re-record all the bass.

What are the main lyrical themes running through the album and how did you arrive at the album title?


It’s all about depression, anxiety with a few hints of revenge! I guess I’ve become a rock n roll cliché with the revenge haha but again it just kinda poured out as I was going through a lot as was Benji and the track ‘DeaDHeaD’ just semmed to be the most complete song on there and it just felt right to call it that.

How do you think it compares to your debut album ‘Eyes’?

Honestly, we don’t. We are completely different band in terms of age, needs and wants of the world personal lives and now we have ‘Joe Constable’ in the band (joined December 2016) the band finally feels complete and apart from the odd track on there ‘Eyes’ is very far away sonically, subjectively and emotionally from ‘DeaDHeaD’.

You are heading out on a UK tour to promote the new album this month (April), how excited are you for this and what are your live shows like for those that have never seen you before?

Interesting you ask this because we have for the first time completely changed how we play live and reworked the whole set around making the songs off ‘DeaDHeaD’ sound the best, biggest they could possibly be and man we are so excited people are in for a surprise!

What new songs are you looking forward to playing most and why?

What else do you have planned for the rest of the year?

We are playing Ramblin’Man Fair, Wildfire Festival and hopefully announcing some other sweet shows later in the year, maybe jump over to Europe too… we are writing already for the next record which we plan to start recording November! No messing about with us now!

Thank you to everyone who is/has getting behind us and our new record ‘DeaDHeaD’ and buying the new merch sharing us on social media and downloading and streaming our songs. We are extremely grateful for you all and thank the universe every day to be able to be ‘The Rocket Dolls’. Thank you for taking the time to interview us, it means a lot!


Check out their latest video for the title track 'DeaDHeaD' below:

For more on The Rocket Dolls: