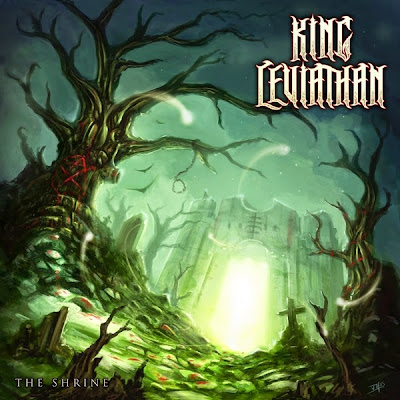 Having only spent just over a year together as a band, Brighton’s KING LEVIATHAN are quickly rising through the ranks of the UK's underground scene with a reputation for blistering tight-as-nails performances that belies the band members ages of just 18 to 23. Last year saw them showcase their brand of 'cultist thrash' across the UK including an appearance at Mammothfest and a main support slot to thrash legends ‘DARKEST HOUR’.

King Leviathan's new E.P 'THE SHRINE' will be released on May 31st.
Track Listing:
WORMWOOD
BORN OF THE BLACKEST HEARTS
SKIN FROM BONE
MADNESS MADE DIVINE
SHRINE

The follow-up to their self-titled 2014 debut, this new 5 track offering 'THE SHRINE' is a marked step forward for the four piece and was recorded over a week long period at Brighton Electric with Producer Paul 'Win' Winstanley at the helm.

"We knew we wanted the next E.P to be bigger and better in all aspects - and Win's work with 'Sea Bastard', 'Whitemare' and early 'Black Peaks' stuff really impressed us! So we hit the studio, and before we knew it we were smashing beer kegs with hammers, scoring violin stabs and laying down choir vocals... Nuts!"

KING LEVIATHAN will be giving a few of these new songs an airing throughout May including dates with Vulgate, the Metal To The Masses Brighton final and finally playing the whole E.P in full when supporting Australian thrash masters 'ELM STREET' at The Prince Albert Brighton, before heading out across the UK in June with 'ABHORRENT DECIMATION.

"We can't wait to get these new tunes out there, we think it's easily the best stuff we've written to date and we're eager to see if the crowds enjoy hearing it as much as we do playing it!"

Catch them live at the following shows in May:

Keep up to date with all things King Leviathan via:
www.facebook.com/KingLeviathanMetal and Twitter @KingLeviathanUK