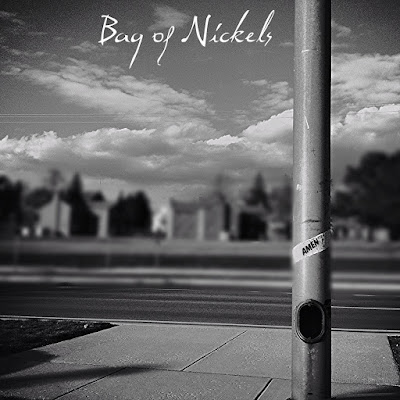 Bag Of Nickels from Wilmington, Delaware have been through some hard times, and have just come back after a hiatus with their third independent release, "Amen" which impressively was produced by Dennis Prado and co-produced/mixed with Philadelphia-based, grammy-award winning engineer, Mike Tarsia.

To open the album, "Hold Your Form" has smooth, groovy and slick rock 'n' roll tones, with resonant effective vocals, all delivered in style, and takes us back to more old school sounds with notable guitar work..it sounds like they are back and on top 'form'!

Next with have, "Impurities" which has some brilliant rhythms and melodies..it's really quite hard to find any faults here! "Trapper Keeper" has a guest appearance from, Danny Carmona, which gives it a different feel and dynamic, whilst in-keeping with the rest of the songs so far..

Again we see Danny Carmona appear in, "The Set Up", which has a great lively, yet chilled out vibe, created through the well placed, fluent and free spirited instruments, evoking tonnes of class which work wonderfully with the vocal pitches.

The greatly titled, "Liquidation Sale" adds some more diversity and has some positive sounding instruments, with a bizarre yet brilliant sound aided by far out vocals and effects.."Speedball" shows interesting and effective vocals, which helps it stand out, along with a odd  ambience, and to round it all off, we are treated to some skilled instrumentation and guitar-work, as seen throughout the album..

Title track, "Amen" opens on a soft note and highlights some smooth bass. It possesses an interesting atmosphere, and sees the use of other instruments, which also make it one of the most varied and therefore must hear tracks, as it embodies the core of their sound!

You can't have rock 'n' roll without "Sex", which closes the album! It sounds pleasant, optimistic and somewhat spaced-out, even though lyrically it contrasts this at times, in what is the longest, most divergent song, with its almost grunge feel and changeable structure and transitions, whilst remaining coherent! A brilliantly odd one to end on, which highlights all their best characteristics!

As they take influence from old style rock 'n' roll which is quite evident in their sound, they have also managed to add in their own stamp to create a solid, refreshing and highly enjoyable album! It has a good mix of songs, ranging from soulful and smooth to tough and unusual, and all delivered in well crafted musicianship and flair! I'm sure others would say 'Amen' to that!