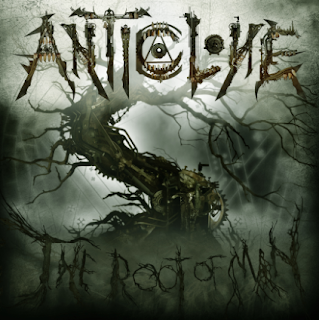 
To open we have the title track, which acts as the atmospheric build up prologue, before demonic drawn out vocals take over and alarming effects, showcasing their industrial sonic nu-metal madness in all its glory...

Deracinated flows well following the opener, with intriguing clean vocals, until the technical franticness consumes once again, in this stomping release that will have an unconformable grip on you!

Mechanical Heart chuggs away with dark down tempo memorable riffs and guitars. The subject matter, highlights the strong digital influence in the modern world we live in, where everything becomes cold and lifeless, reliant on machines. A very thought provoking number!

Astaroth is simply mental, and highly reminiscent of Korn and Slipknot, which isn’t surprising as produced by Matt Hyde (Slipknot 'All Hope Is Gone' - Machine Head 'The Blackening') . With agitated fast guitars, pounding drums and crazed vocals, all coming together to make a monstrous melodic groove!

Final and longest song, Sentinel wreaks havoc with Mr Clone barking ferociously, although this changes pace, as it progresses with resonant clean striking vocals and slower paced sections, making a varied and balanced one to end this deranged offering!

This album is chaotic and thrilling, unleashing their distinct apocalyptic intelligent well-structured nu-metal. You won’t be disappointed, with their intense delivery, making for a stand out debut!

The debut album 'The Root Of Man' is released 29th April 2016 via PHD (Plastic Head Distribution).