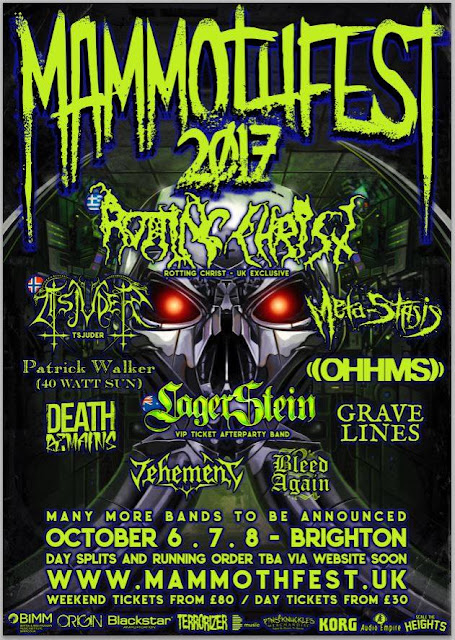 Mammothfest 2016 was a resounding success with heavyweight acts such as Textures, Venom Inc and Conan leading the metal assault that resulted in a near complete sell out, and saw the festival nominated for three festivals award nominations, including the UK Festival Awards in two categories, Best Metropolitan and Best Small Festival 2016 as well as the TBFM Best Independent Festival 2016. The festival continues to expand and grow each year and this year will be no exception…


Only one month into 2017 and Mammothfest have already announced the first 'Mammothfest presents' show in April, along with redesigning the artwork and concept. Now armed with the metal mammoth, we are getting straight to what we all want to know…the line-up for this year’s festival!

That is right, in 2017 the only place you will be able to see Rotting Christ is at Mammothfest 2017!

Hailing from Oslo Norway we are extremely excited to announce the three piece TNBM stalwarts Tsjuder for a rare UK appearance as main support to Rotting Christ. Tsjuder formed in 1993, they released a few EP’s before signing to Drakkar Productions and releasing their first full album 'Kill For Satan' in 2000. They have since gone on to release four more albums. However, in 2006 they diminished briefly before fortunately reforming in 2010.

The band only made their live debut in the UK in 2015, which was the same year they released their fifth and current album ‘Antiliv’. Tsjuder is heading out on tour to South America in March 2017 and later in the year luckily they are gracing our UK shores yet again, to the joy of metal fans in Brighton. With an old school satanic Black Metal sound harking back to the style of the 80s and early 90s Black Metal bands, Tsjuder is an amazing live band. So, come and witness their uncompromising dark atmosphere at Mammothfest!

To open the mighty Black Metal stage and the entire festival is a regular Mammothfest extreme local metal act, Vehement. Hailing from the South Coast of England, Vehement have been flying the Black Metal flag in Sussex for many years, including winning the Metal 2 The Masses competition in 2016 for the area, leading them to wow the New Blood stage at Bloodstock that year. The band always go down a storm and are back again to raise hell and kick off this black metal extravaganza. With an eagerly awaited album due for release, we are sure there will be plenty of hype surrounded the band.

On Saturday 7th October 2017 on the Death/Extreme metal stage, the headliner and main supports are yet to be unveiled. However, have no fear as we can confirm some acts, including some regular Mammothfest crowd pleasers, such as Meta-stasis who formed from two bands, Sikth and Ted Maul, and have been terrorising the masses ever since this mutation in 2012. They describe themselves as Psycho-Tech-Death-Neg Beat-Industrial-Lunatics! And have appeared at many festivals across Europe including BLOODSTOCK 2nd stage 2016, METAL DAYS 2013, touring with BEHEMOTH and KORPIKLAANI in INDIA twice this year as well as supporting bands such as Psycroptic from Australia, Ingested and many more. A new 3rd studio album is nearing completion, can the madness get any more divine!?

Next up is London metal act Death Remains whose debut 2013 album, ‘Stand.Fight.Believe’ received critical acclaim and have since built quite the reputation, with much hype about their anticipated sophomore album.


Lastly, ones to watch are Bleed Again, who are Brighton heroes and fan favourites at Mammothfest. In 2016, Bleed Again delivered one of the most memorable sets of the weekend, in which they filmed their latest song and video for the melodic ‘Through The Eyes’ and earned them one of the best crowd reactions of the whole festival. That along with their upcoming hot debut ‘Momentum’ out May this year, this year is their year and having already supported the likes of Soil, Darkest Hour and Devil Sold His Soul with their reputation for blistering live sets, you don’t want to miss them.

For Sunday 8th October 2017 on the Stoner Doom stage again the headliner and main support isn’t yet released but confirmed acts are the main man behind 40 Watt Sun, an alternative act from Devon, UK with Patrick Walker (only he is an original member, the rest will be session musicians) & OHHMS from Canterbury UK who have only been going since 2014 and have a unique stand out sound.

Lastly, emerging Brighton act, Grave lines (including Iron Giant from Sea Bastard) who are doing well for themselves, currently supporting Belgian act Oathbreaker will be smashing their way through their performance with some of the heaviest riffs of the weekend!

As well as the main stage there will be our beloved RIKSTOCK stage dedicated to providing a platform for our incredible emerging artists but more on this to be announced in the future.

Lagerstein are the first VIP After party band confirmed and what a party that will be on Saturday 7th October 2017. Lagerstein are the ultimate party band, as they are a seven piece drinking, rocking, pirating rock/metal/folk act hailing from Brisbane, Australia. They have toured with the well known pirate metallers, Alestorm, as well as bands such as Kataklysm and more. Along with the seven members, they are armed with additional session musicians who are effectively their drinking crew! Come and be part of this pirate metal party!

Mammothfest will be announcing other after party bands over the coming months so if you plan to party on late in to the night then you must secure one of the very limited VIP tickets available on the website!

Limited to only 50 VIP tickets all weekend (20 weekend and 30 per day VIP tickets only) and already selling fast, not only will you gain access to the after parties, Mammothfest will be inviting you all back stage to meet the head line bands too each day (relevant ticket required)!

Traditionally Mammothfest usually takes place across a variety of Brighton music venues, however, the festival has listened to what the fans want and have decided to host this year’s festival in just one venue, the easily accessible and great venue right on the beach on the sea front, The Arch.

The venue features two live rooms, meaning it will be easy for fans to go between the two stages enhancing the mighty experience, as well as being in a prime location for locals and non-local fans alike, as it is located near the train station.

The smaller room will also be where the VIP after parties are held each night and with one step out of the venue you are literally on the beach!

The last update is that along with the redesigned image and artwork of the festival is a new website www.mammothfest.uk - so check it out now, sign up to our mailing list and be the first to get the latest news as well as discounts, prizes and more.

What an announcement! That should keep you going until the next one, with plenty more bands still to be announced.

Tickets for Mammothfest are available now with a variety of options, including day tickets and VIP weekend tickets: https://mammothfest.uk/product-category/tickets/