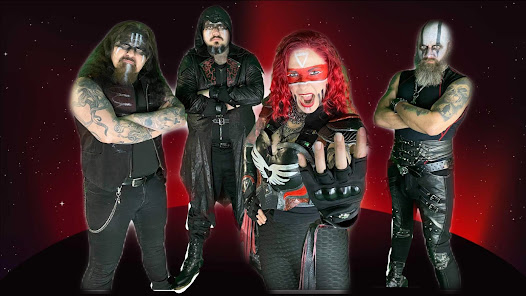 Emerging from the edge of the river of Styx, the Siren and her men prepare to fight for this epic battle that surely awaits.

In between two dimensions, alive but among the dead, they have crossed over.

In The Dark Forest, the Wolf awaits....

Check out the new video below:
https://youtu.be/X06SJXjYDWE

Illusions of Grandeur is a Theatrical Hard Rock/Fantasy Metal band based in Lancaster, PA.

The Siren Saga is a story of the journeys, perils, and triumphs of the Siren and her warriors. The story mixes facts and fiction combining Greek and Norse Mythology, Sirens, Viking Warriors, Archangels and Kharon “The Ferryman”. The first part, “The Songs of the Siren”, is to be released on Pavement Records in 2019.

Since their formation, Illusions of Grandeur have toured in the United States as well as across the UK and Europe, and made appearances at various festivals including Sav Fest, Dewey Beach Music Festival and Witney Music Festival. I.O.G. has shared the stage with artists as varied as DOPE, Motograter, September Mourning, New Year’s Day, Puddle of Mudd and Otep.
Illusions of Grandeur’s fierce and energetic live show has gained them a legion of fans dubbed “The Siren Nation” who follow them worldwide, at live shows, and on social media.
The Wolf (lyric video):
https://youtu.be/Z9vXr1QfvkM