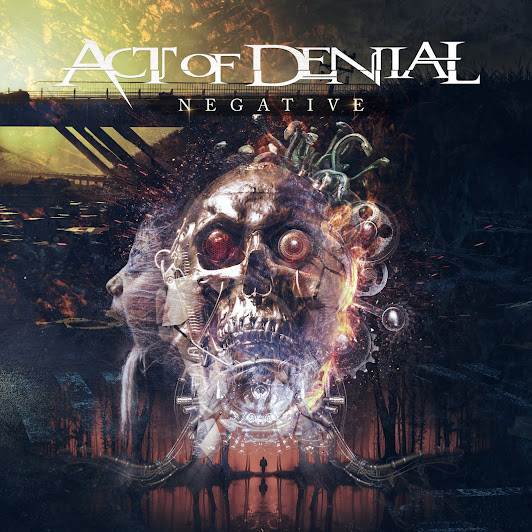 International melodic death metal group Act Of Denial was founded by lead guitarist and songwriter Voi Cox (Koziak, Victim) and guitarist Luger (Koziak, Benighted-Cro) in early 2020 to create early melodic death metal like they grew up with. They enlisted the help of some of their idols and those they admire to bring their vision to life. They are joined by Björn Strid (Soilwork), bassist Steve Di Giorgio (Death, Testament), drummer Kerim “Krimh” Lechner (Septicflesh) and keyboardist John Lönnmyr (The Night Flight Orchestra). As if the project line-up wasn’t hefty enough, some of the tracks also feature special guests.

The opener ‘Puzzle Heart’ gets things off to a rapid and sizzling start that immediately hooks you in. Björn Strid’s diverse and signature tones work wonderfully, which is no surprise given his work with Soilwork. The song delivers the perfect blend of melody and aggression to take you on an exhilarating ride and sets the scene for the rest of the album.

The striking ‘Controlled’ kicks off with melodic hooks and riffs, which are present throughout and features a standout guitar solo from DEATH’s Bobby Koelble, adding some extra clout to the track.

Offering a change in pace, ‘In The Depths Of Destruction’ opens with a stripped back calm guitar intro and a generally slower pace, but it still hits hard with its highly melodic sounds and keeps things exciting with its tempo changes. The title track ‘Negative’ gets back to higher speeds and is a crushing melo death number representing the album’s sound. The memorable and fiery ‘Slave’ features another guest appearance from ex-Soilwork guitarist Pete Wichers delivering a slick solo and is a standout track with strong key/synth sounds from John Lönnmyr, which are highly effective.

One of the heaviest tracks, ‘Your Dark Desires,’ thumps hard and to top it all off, it features an insane and powerful guitar solo from virtuoso Ron Thal Bumblefoot (Guns N Roses, Son of Apollo), which you would expect. The final song, the resonant ‘Clutching At Rays Of The Light’, is extremely catchy and features some of Bjorn’s most varied and best vocals. A robust way to close the album.

All six members unite together to produce tight and high calibre melodic death metal. It is the perfect balance of heavy and melodic, with each member and guest musician bringing their passion, energy and talent to the table throughout all ten tracks. The songwriting and craftmanship are brilliant, making this a striking debut, and it will be exciting to see what lies ahead for Act Of Denial.

Check out our interview with Voi to find out all about Act Of Denial:

https://www.madaboutrock.co.uk/2021/06/interview-act-of-denial-we-just-want-to.html
'Negative' is released on 13th August, out on Crusader Records.
For more visit: