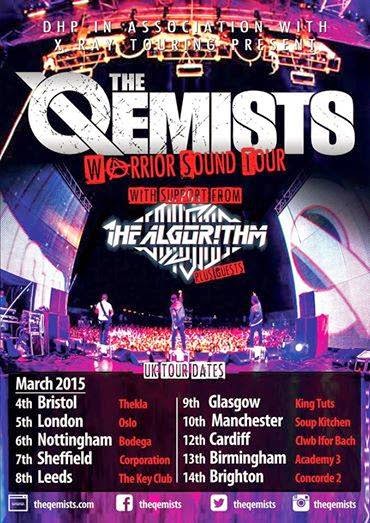 Ahead of their much anticipated new album "Warrior Sound" Brighton Drum and Bass / Rock fusion act The Qemists have signed a new publishing deal with Just Isn't Music the publishing arm of Ninja Tune Records.

The Qemists are currently on tour as special guests with Korn in Europe. They have recently scored the music for the new Nike Mercurial Superfly Christiano Ronaldo advert.

Liam Black from the band said " We are really pleased to have signed a new publishing deal with the guys at Just Isn't Music. It's great to be a part of their brilliant set up as they are legends when it comes to procuring sync opportunities for their acts/writers ".

The Band also recently signed to Adam Saunders and Shaun Faulkner at X Ray Touring for bookings and are currently putting the finishing touches to their new album Warrior Sound which features collaborations with the likes of Hacktivist, Ghetts, and Crossfaith .

The band will also be doing an extensive UK tour with support from The Algorithm which starts at the Thekla in Bristol on March 4th and finishes at Brighton’s Concorde 2 on March 14th. Full dates below