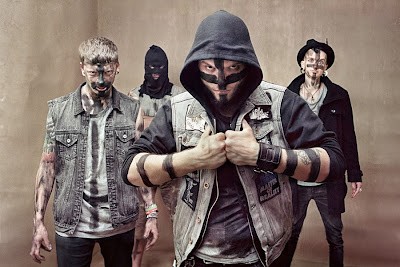 King Leviathan are a four piece thrash band from Brighton obsessed with the occult, and having only been together just over a year, they are quickly building their campaign of followers and stamping their mark into Brighton’s ever growing music scene! With their memorable brutal live shows, including performing at Brighton’s very own metal festival, Mammothfest, and the impressive accolade of being main support for Darkest Hour! This young band in both age and formation have accomplished a lot already, and they return with their follow up to their debut with new EP, ‘The Shrine’ ready to conquer..

First song, ‘Wormwood’ gets off to a blistering start with powerful striking vocals and insane guitar work. This embraces modern and classic thrash, in an melodic manner which will wiggle and rive in your mind and introduces their style and context for the EP wonderfully...

‘Born Of The Blackest Hearts’ boasts demanding vocals and colossal instrumentation, this is one dark beastly offering! ‘Skin From Bone’ breaks out into a brilliant instrumental opening fuelled by melodic guitar licks, before bursting into full thrash mode accompanied by Adam’s demonic vocals, which are complimented by clean stand out sections from Rob and Sam. Rob again pelts out his ferocious guitar skills, making this a ‘bone’ crushing number!

‘Madness Made Divine’ highlights Adam’s mammoth vocals which fittingly have an air of mania, which truly suits this genre. The instruments rampage on in a relentless and determined wave of well...Madness!

Last song and title track, ‘The Shrine’ displays the most variety, with changeable atmospheric sections and time signatures, which help give more depth and emphasis in parts, such as the gleaming clean sections, menacing choir effects and ringing drums, resulting in dramatic dark ambience which rounds of the EP superbly and in an valiant fashion!

This offering is coherent, intelligible and oppressive in the greatest sense. Their immense sound really shines through in a bold and technical delivery; The have really brandished their signature sound into these callous clever gifts for ‘the old gods’ as the band say! Accept and embrace these well-crafted offerings and bring forth their inevitable new masses of deranged worshippers! 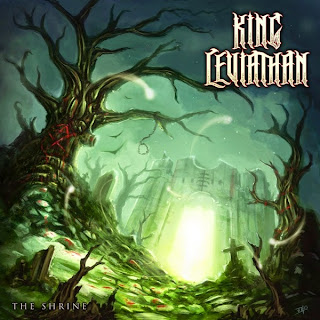