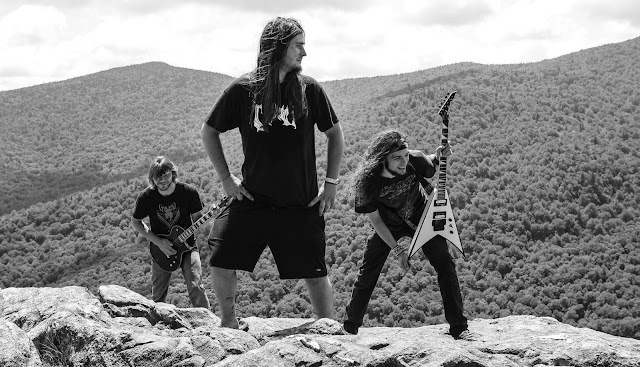 Crypitus are a four-piece death metal thrash band from Vermont, US who formed in 2015 with a revamped line-up in 2016. They recently released their first studio release and new demo titled "Exhibit 1: Prelude to the Dead World", so the band discussed this amongst other things, such as what their band name means, touring and what is in store for the future...

Can you tell us about your formation as a band?

Joe: I joined after a friend introduced me to the band when they were looking for a bassist.


Zach: Doug and Pete were already together and I was desperately searching the internet for musicians to jam with. Pete responded with Doug in toe and the rest is history.

Pete: Doug and I lived together and inevitably started jamming to some songs he had. We decided to find a drummer and Zach showed up on Facebook. The rest is history.

Doug: Crypitus was already a working idea in my head and after watching a local show in Rutland I knew that it was time to unleash it again so Zach Pete and I joined forces; ate a few bassists and now we are happy to have Joe with us.


So how did you come up with your name?

Joe: I think Doug takes credit for the name. Its the sound of breaking bones!

Pete: Doug came up with the name. It's Latin for the sound of bones breaking.

Doug: One day in a wilderness first aid class I was taking my teach ecstatically comes up to me and exclaims “Do you know what would be a sick metal band name?! Crypitus it’s the sound of breaking bones!” I was sold immediately.


You recently released your debut studio demo called ‘Exhibit 1: Prelude To The Dead World’, how happy were you with how this turned out and the response so far?

Joe: It's pretty. People seem to enjoy it.

Zach: I'm really thrilled with the response so far. I just want to start our full length.

Pete: Most of the reviews have been positive. I'm really pleased with how it turned out.

Doug: Shit I’m happy enough to be able to hold our creation in hand but radio play and internet streaming physical copies banging in car rides and at Cherry Street Station in CT; I couldn’t be happier.


What was the hardest part of recording the demo?

Joe: I'm wasn't in the band during the demo.

Pete: The bass I think. We went through several different bass players during the recording.

Doug: Being happy with my guitar solos hahaha.


How did you come up with the name of the release and what is the main themes and meaning behind it?


Doug: I decided on the name Exhibit 1: Prelude to the Dead World for a couple of reasons. The first being is that a prelude is a perfect way to introduce a band but most importantly I found with the chosen songs it was the perfect representation of the theme. A quick glimpse at all different angles of the dying world; mental turmoil, a bitter escape and a retaliating mother earth.


You seem to have diverse influences as a band, what are some of your main influences currently?

Pete: I'm always influenced by Frank Zappa's outside the box playing style. As metal goes, Black Dahlia Murder's newest album has been on constantly in my car.

Doug: I've been on a Death Angel, Municipal Waste and Exodus kick.


Although you have just released your demo, are you currently working on any new material or a full length and if so, what can we expect from future songs?

Joe: We are always working on new music. We'll record something eventually soon.

Zach: We always have new material that were working on, but sadly we don't have plans for a full length, which again is sad because we have almost two albums worth of stuff.

Pete: We have plenty more songs than what we put on the demo. We have lots planned for the next year...

Doug: We have plenty of materials, this was our “Just the tip” release!


How would you describe your live experience?

Doug: An intimate metal experience with headbanging thrashing and shredding!


Have you got any touring plans lined up?

Joe: We have a summer tour next year.

Zach: We're currently working on a big tour for the beginning of summer. Stay posted.

Pete: We have some scattered shows planned between now and next June when we have a full week tour planned.

Doug: It's going to be a 7 day tour with our brothers for Western Mass An Unction in Braille!


What have been some of your highlights from 2017 as we near the end of the year?

Zach: Our last few shows have been memorable. Great crowds and great energy at great venues. Also, the night we played with Psychostick.

Pete: Meeting so many new people and bands at the shows we've played. We've conquered New England. Next stop, the rest of America.

Doug: Oh jesus, Geno’s in Portland was great, our last Cherry Street show was great. This was overall a defining year for us.


What else do you have planned for 2018 and beyond?

Joe: A tour next year. Who knows after that.

Pete: Shows, a tour, maybe a full-length album. At least one new single.

Doug: We will soon be releasing another single, we have our summer tour, we have been invited to a few festivals in Maine next summer that should be killer! Hoping to invade Canada and south of NYC!


Is there anything else you would like to add?

Zach: Despite what Doug may tell you, Crypitus is the sound of breaking phones.

Doug: Don’t forget to check out our website and merch store at Crypitus.com!


Exhibit 1: Prelude to the Dead World is out now. You can listen or purchase the release on the below links: