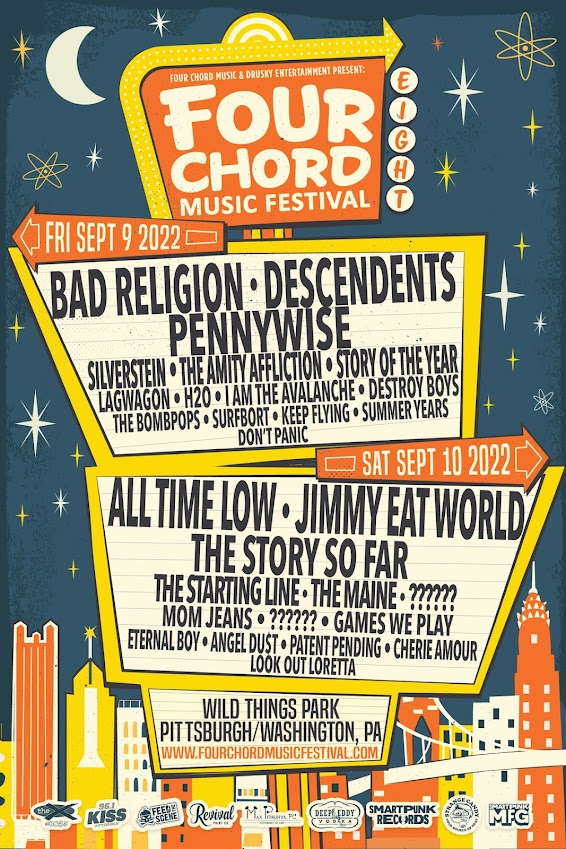 Four Chord Music Festival returns for its eighth installment of the independently produced festival bigger and better than ever before. For the first time since its inception, the Four Chord Music Festival will be expanding to a two-day festival on September 9th and 10th and will feature a multitude of bands, including headliners All Time Low, Bad Religion, Descendents, and Jimmy Eat World, plus additional performances from Pennywise, The Story So Far, Silverstein, Lagwagon, The Starting Line, The Maine and many more. The festival will take place at Wild Things Park, in Washington, PA, just a short 30 minutes outside of Pittsburgh, and is presented by Four Chord Music & Drusky Entertainment.

What began in 2014 as a local punk rock festival in a 1500 capacity club, has quickly grown into a massive stadium-sized 2-day destination event, featuring some of the scene's biggest and brightest, while keeping its independent DIY roots intact.

Festival founder Rishi Bahl says, "This is it. This is the festival I had dreamed of being able to put on since this started in my apartment 7 years ago in Pittsburgh. I can't wait."

August 07, 2021
The Dead Daisies have released a new single 'My Fate' ahead of their  upcoming Like No Other World Tour. The crowds lapped up this darker and more mysterious track during the warm-up shows in the US last month so what better choice for the new single. ‘My Fate’ is available now on your favourite digital platforms below so stream away and turn it up loud.  https://thedeaddaisies.com/myfate-radio-edit/ You can also check out the My Fate (Trailer) video below: For more on The Dead Daisies: https://www.facebook.com/TheDeadDaisies
2 comments
Read more