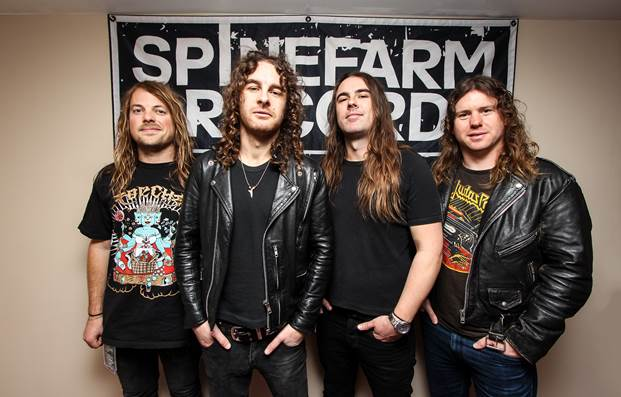 AIRBOURNE –unswerving champions of the hard rock cause whose spectacular global success, live and on record, has consistently clenched a fist for the genre as a whole – have signed a worldwide deal with Spinefarm Records.

Driven by a formidable work-hard/play-hard ethic, and keen to entertain on the grandest of scales, this award-winning quartet (formed in regional Australia in 2003) have been proudly walking the rock ‘n’ roll path since their early teenage years, inspired by the music’s great and glorious past, yet determined to move things forward on a wave of blurred limbs & boundless energy.

Led into action by brothers Joel &Ryan O’Keeffe (vocalist / lead guitarist & drummer, respectively; the line-up is completed by David Roads on guitar and Justin Street on bass), the four have spent the past 10 years establishing themselves as a true force of nature – living on the road, selling out major venues, charting albums and appearing on bills with some of rock’s most legendary names, from Iron Maiden to the Rolling Stones.

With Airbourne, everything is to the hilt, which means that frontman Joel O’ Keeffe is as likely to be climbing the lighting rig or going ‘walkabout’ in the venue as positioned behind the mic; it also means that their three studio albums – ‘Runnin’ Wild’ (2007), ‘No Guts. No Glory’ (2009) & ‘Black Dog Barking’ (2013) – are home to some of the most rousing rock anthems of the past few years, songs like ‘Too Much, Too Young, Too Fast’, ‘No Way But The Hard Way’, ‘Live it Up’ & ‘Runnin’ Wild’ itself – a body of work that hasn’t escaped the notice of AC/DC’s Angus Young, who was recently asked in an interview what he thinks of modern rock music & he said“I see it as healthy, because there’s newer stuff coming through. I really like Airbourne”.

SINCE the release of ‘Runnin’ Wild’ (a silver record in the UK),Airbourne have notched up an impressive array of international facts ‘n’ stats: these include Top 20 chart entries, # 1 Rock Chart positions, awards for ‘Best Album’ & ‘Best Live Act’, numerous placements in video games and TV / movie outlets, plus key spots at the biggest festivals around the world, the likes of Wacken &Rock Am Ring / Rock Im Park in Germany and Sonisphere & Download in the UK, with Sweden Rock, Greenfield (Switzerland), Hellfest (France) andGraspop (Belgium) already confirmed for 2015.

Now, with sights set on absolute world domination and Album Number 4 likely to be released later this year,Airbourne have joined forces with Spinefarm Records in a new global deal that sees Spinefarm partnering with Universal Germany’s Vertigo imprint for the German speaking markets…

“We’re pumped up to have signed on the dotted line to the world's toughest and truest hard rock label, Spinefarm. We have worked with some of the guys on this team in the past, and we’re extremely confident about having each other's back in the trenches for many hard rockin' years to come. We're chompin' at the bit to get ROCKIN' and KICKIN' ARSE in 2015 & beyond” – CHEERS from Airbourne.

“We are so proud to be the new global home for the amazing AIRBOURNE! They are a band who have thrilled audiences around the world with their insanely energetic live shows and wildly anthemic songs, and all of us at Spinefarm are thrilled to be part of their ensuing juggernaut.”

Daniel Lieberberg,Senior Vice President, Universal Music Germany, adds: “Germany, Austria and Switzerland have always been strong markets for this unique band. We’re excited to closely collaborate with Spinefarm Records on our mission to bring Airbourne to a new level in our part of the world.”

2015 finds Airbourne perfectly placed to take things to a new level everywhere, building on their passion, hard graft and heady achievements, and bringing along an ever-growing army of fans for the (white-knuckle) ride; and one thing’s for sure, there’ll be no resting on laurels…

Ask Joel O’Keeffe about his days in college, and his response neatly spotlights ‘The Airbourne Way’…

“I drove by the college on the way to a gig,” he recalls,“this was in the early days, all the gear was in the back of the van. I planned to stop off and pick up the diploma certificate, but in the end I didn’t bother. I didn’t want anything to fall back on, NO Plan B… I knew what I wanted to do, I was committed to Rock’n’Roll, so as far as I was concerned, it was and still is all or nothing.”


Cellar Darling is comprised of Anna Murphy, Ivo Henzi, and Merlin Sutter who recently formed following the spilt from previous well-known folk metal band, Eluveitie. The trio have been hard at work since, creating their anticipated debut album 'This Is The Sound' which was released June 30th via Nuclear Blast Records and have impressed fans and press alike with their fresh and unique sound which has been dubbed as "the new wave of folk rock“. This is an exciting and busy time for the band, so I caught up with them to find out about their origins, their new album, touring and what is in store for the band amongst other things..

Can you tell us about the formation of Cellar Darling following leaving your previous band Eluveitie and how the band came to be?
Merlin: What I remember most clearly is how quick it went. As you might know, the whole thing with Eluveitie came very unexpected for us - we were informed of a decision by the remain…
Post a comment
Read more