The Red Jumpsuit Apparatus Release Thought-Provoking 'The Emergency EP' & Lyric Video For 'Is This The Real World?' 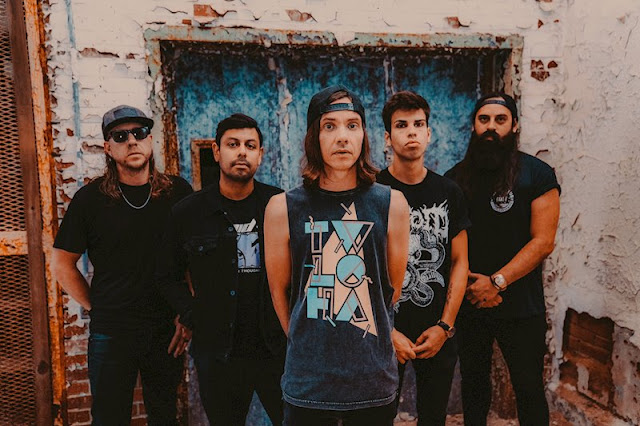 The Red Jumpsuit Apparatus have released their thought-provoking new 'The Emergency EP'. The songs touch on sensitive and ‘hot-button’ topics – and the band is sending out a clarion call of awareness for everyone to wake up and pay attention to what’s going on in the world around them.

For example, the lead track and video from the EP, "Is This The Real World?" is a warning to make sure people are asking questions about what they see and read online – to make sure the info is correct and from a trusted source.

Check out the lyric video for 'Is This The Real World?' below:

Lead singer Ron Winter wants people to think with their heart and their head. He says of "Is This The Real World?": “In this era of augmented reality and 'deep fake' secrets – we find ourselves more and more asking the question: Is This The Real World? It can be hard to know what is real and what isn't nowadays. It's important to question what we see, especially things posted online – before we rush to judgement. Making sure that the information presented to us is correct and that we aren't being manipulated for a more nefarious purpose is of utmost importance. Things are being twisted into untruths. We are constantly fed fear, racism and bigotry - which are meant to divide. Division keeps us apart - I want to unite everybody because we can actually do that”.

Winter fearlessly addresses his support for people who have been marginalized for entirely too long. His support of Black Lives Matter and the LGBTQIA+ community comes to a fever pitch on the strident “Don’t Buy Into It.” As a Christian, Winter’s prism of the religion is far more inclusive than what the gatekeepers preach. He wants to see the end of racism and bigotry toward people of color and the LGBTQIA+ community.“These are things that really bother me - with this EP, I’m bringing the fans to the next level. I’m saying, “Hey, guys, that’s not enough. If you were with me on ‘Face Down’ (a song about domestic violence), I need you with me on these new songs. Since the beginning of this band, we’ve encouraged people into action for good”.

Along with some of the controversial topics, ‘The Emergency EP' marks a number of firsts for the Red Jumpsuit Apparatus. While they still cater to and love their die-hard fans who have been with them since the beginning, they have also garnered new fans in 2020: Their Social Media has grown on all platforms this year, and they now have more than 1.8 million followers, collectively. They have embraced new technology for communication, and also creating music: All the songs on ‘The Emergency EP’ were written and recorded in the back of their tour bus at the end of 2019 – which is something they’ve never done before. The lone exception is ‘Please, Unfriend Me’, which was written this spring while everyone was quarantined by Covid-19.

The band has previously released 2 singles from 'The Emergency EP': "Brace Yourself" – a song whose message has been embraced by First Responders worldwide (a portion of the profits are earmarked for charities that support Emergency Workers families). The song has amassed 1.7 million audio streams and more than 3.2 million video views on Youtube. The first release from earlier this year was "A Long Time Ago In A Galaxy Called LA". Both songs received placement on curated playlists on all major streaming platforms. The band’s catalog has achieved streaming numbers that few rock bands ever achieve: TRJA have more than 1.3 Billion audio streams of their songs, and more than 250 million views of their videos on Youtube. The band has released 5 full length albums: "Don’t You Fake It” (2006), "Lonely Road" (2009), "Am I The Enemy" (2011), "4" (2014) and "The Awakening" (2018); 3 EPs and 21 singles.

The band has kept their loyal following through constant touring, and have played countless headlining tours along with featured appearances at some of the biggest festivals in the world. These include the Vans Warped Tour, Rock on the Range, Inkcarceration, Bamboozle and SXSW in the U.S.; Soundwave in Australia, and Radstock & Slam Dunk festivals in the UK. The band plans to start touring again as soon as conditions permit.