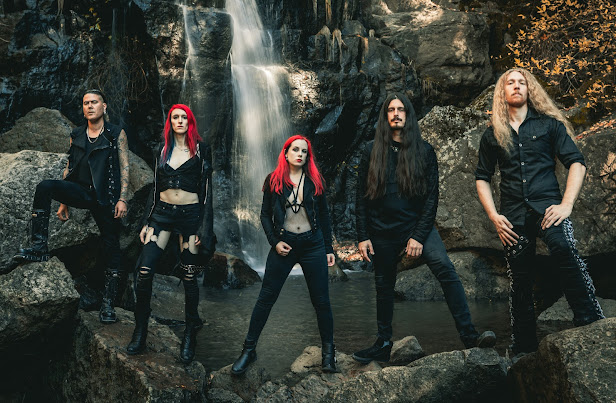 The Sacramento-based quintet GRAVESHADOW – who deftly mixes symphonic/gothic metal with elements of doom, thrash and epic progressive power metal – have unveiled “The Swordsman,” the latest single from their forthcoming album, “The Uncertain Hour.” The band's third album will be released July 15, 2022. “The Swordsman” is also special as it features guest vocals from Chelsea Murphy (Dawn of Ouroboros, Cailleach Calling, Tegmentum). GRAVESHADOW will also begin their West Coast tour on the same day at Barmadeggon in Tulare, CA, performing alongside Pacific Northwest blackened progressive-metal group VINTERSEA on “The Uncertain Hour Tour 2022” through Saturday, July 23rd at Cafe Colonial in Sacramento, CA. Full tour dates are below. In the meantime, the streaming audio visualized for “The Swordsman” can be viewed at https://youtu.be/WnFOUN9S4aw

Pre-orders for CD and limited-edition (200) vinyl copies of GRAVESHADOW's upcoming third album, “The Uncertain Hour,” are available at www.smarturl.com/graveshadow.
“I’m really excited to release ‘The Swordsman’ which has kind of snuck up on me as another favorite off the record, explains GRAVESHADOW vocalist Rachl “Raxx” Quinn. “The interplay of the clean and harsh vocals was something I was thrilled with the outcome on. The way they support each other really adds a great dynamic to the song. As a band it was great to have Chelsea guest on the track, her performance is absolutely incredible!”

“The Uncertain Hour” - produced by Miss May I guitarist Justin Aufdemkampe (Clutch, War of Ages), mastered by Alberto De Icaza (Crobot, Zoey’s Extraordinary Playlist) and featuring artwork by Roman Ismaylov (Battle Beast, Beast In Black) - sees the new lineup for GRAVESHADOW continue to refine their enticing mix of symphonic, gothic, doom, and epic progressive-metal elements, now augmented by the newfound energy that has been brought into the band by the soaring melodic performance of new vocalist Rachl “Raxx” Quinn and the rumbling rhythm section of new bassist Luci Rae and new drummer Bones Padilla (formerly of labelmates Cultural Warfare). The returning guitar duo of William Lloyd Walker and Aaron Robitsch once again deliver a beautiful display of guitar histrionics that tastefully mixes searing shred with a warm melody. Graveshadow are back on the scene with a story to tell. Intertwining melodic highs and crushing lows to sweep listeners away on a journey of self-discovery, loss and the will to carry on.

The first taste of new music from “The Uncertain Hour” was unveiled in March 2022 with the music video for “Soldier of 34,” which can be viewed at https://youtu.be/qXDzhkfRjuM. The new lineup for GRAVESHADOW initially began to take form with the release of their May 2020 single “Gwynnbleidd.” Inspired by the Witcher series, the song showcased the return of the band with the debuts of Quinn and Rae, and can be heard here https://youtu.be/XrorDG70g3Q.

GRAVESHADOW's previous album, 2018's “Ambition's Price,” was given accolades by Metal Utopia for being “a great record with lots of great moments for fans of Nightwish and The Birthday Massacre.” Metal Nation praised “Ambition's Price,” declaring that “GRAVESHADOW has taken what has become a somewhat complacent and stagnant style of metal and breathed fresh life into it, creating something vibrant and memorable.” The fantastical lyrical themes that were explored by the band on “Ambition's Price” - their debut record for M-Theory Audio and the follow-up to the group's incubatory 2015 debut full-length “Nocturnal Resurrection” - were applauded by critics and fans alike. The band followed the release of “Ambition's Price” by winning over new audiences with extensive touring alongside bands such as Arkona, Sirenia, Exmortus, Night Demon, and Unleash The Archers.

More information on GRAVESHADOW and the upcoming release of their new album, “The Uncertain Hour” will be revealed in the weeks to come by M-Theory Audio and at https://www.facebook.com/Graveshadow.