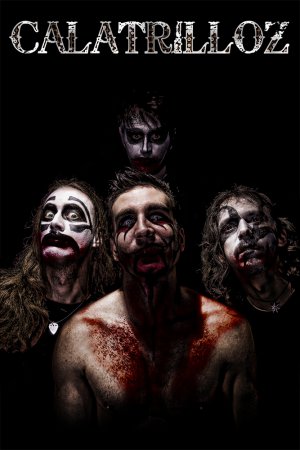 Calatrilloz is a theatrical operatic gothic rock band from London.

They have a very unusual and interesting name, which comes with a bizarre ‘story’.. it is a name of a circus family, protagonist of a tale created by Brazilian, Mr Z, who after singing classical opera for many years decided to create a new musical project, but instead of starting with the conventional method of song writing, he created a story that would inspire his music..This idea had brilliant results and led to a mix of different genres, including Gothic, Rock, Jazz, Theatrical Opera and Circus vibes...with his strange musical concoction he headed to London where luckily he found the rest of Calatrilloz..
Arthur (Bass), Dan (Guitar), Luca (Drums) and Maya (Violin).

I personally was thrilled to come across this band as I love the whole concept, image and unique twist on their music and that fact that they incorporate theatrical drama. It is a weird and wonderful combination, that works perfectly and gives the band a distinctive stamp, which frankly is what bands crave..So hats off to them!

At times it reminds me of something you would hear in a Tim Burton film and their imagery also conveys this, their whole sound/image is perfect for gothic movie soundtracks! Their new video for, “Z The Psychopath” produced by Thomas Stimson, is captivating and crazy whilst the song is catchy, it sounds like a mixture between System Of A Down and Breed 77 but overall its their own unique sound! And their appearance and menacing make-up adds to the drama of the song, and lead singer, Mr Z himself especially looks absolutely insane..They do say that every genius is insane!..I adore this band, I’m hooked..Their video for the brilliant, “Origins” is quite simply a work of art..Which pretty much sums up the band, visually and musically...they deliver on all fronts! This is a band everyone should be talking about!..This is one story you will want to watch unfold!..I can’t wait to see what the next chapter entails for the band!

The band has played a number of events and festivals, ranging from London to Madrid and they are currently on tour with Blooding Mask (a classical opera electronica goth band from Wiltshire, Midlands) and tonight on the 20th of November are playing at the Pretty Goth Theatre Festival in London which is free so don’t miss it! Its at the Fiddler Elbow, Kentish Town at 17:00 then the next day on the 21st they are playing another festival, Spider Web Festival in Bristol...If you can try your best to see this band live, sounds like they put on one hell of a show like no other band!

Their new EP, “The Rise Of The Leviatan” is out now.