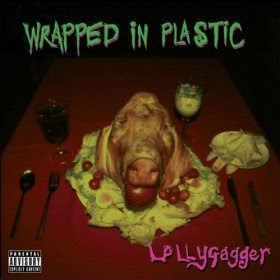 I put some questions to the sick and twisted minds of Birmingham based band, Wrapped In Plastic..

How you sum up the new EP, "LollyGagger"?Dope.

How do you think it compares to your previous material?
A loaded question. As with our previous CDs, this is produced by us, and with the experience, our skills have continued to improve. This is probably the more ‘conventional’ of our CDs in presentation terms, but the music is not compromised. It still is fuelled by hate, abuse and little boys.

What are you most proud of on the EP, do you have any particular favourites, and if so why?The songs are all like our children and so it wouldn’t be fair to single any particular on out. Like children, you can tell that one might be more pleasant to others, whilst another might just be trouble. But they are all equally important.

Explain the concept behind it.
Well, explaining these things tends to dilute them – too prescriptive. The people who this is designed for will get it and those who need an explanation probably would be better off not knowing. It’s much more interesting to see people’s ideas and thought processes in action. That said a good starting point is the theme of control.

How did you come up with titles such as, 'Popomatic' and "Monkey See"? Is "Popomatic" named after the die container in the board game, 'Trouble'?..With lyrics like, "Push it down, pop it up, the dice rolls again"..I'm guessing so, which if so is a very different and interesting idea!
Popomatic is indeed named after the dice rolling mechanism – the idea of people’s mis-evaluation of risk which leads them to avoid doing the things they want to. The rise of fear leading towards submission to less scared people. Life is a game in many ways and too many people are too chicken-shit to try and play. Monkey See refers to that old saying – people are much too keen to ape others and blindly follow ideas they don’t understand. The really sad things it that there aren’t enough monkeys doing anything – just simian eyes watching aimlessly..

Where do you find your inspiration from dare I ask?...
From everything we see and experience really. I tend to get more inspired by things that annoy me than things I enjoy – the urge to change or counter something is a very strong impetus, otherwise you just follow the stream. So it’s things like TV, books, art and popular culture that fuel me. Nothing like watching chat shows to reaffirm how fucked up society is.

What makes your gigs stand out? You are a very bold and unusual band, how do you incorporate that in your shows?
We’re just trying to entertain ourselves really – a feat that tends to be called extreme or shocking. We’re not going out to shock – that is too easy and dull. But people’s boundaries tend to be rather small and confined. We just dwell on and explore the more sordid side of society and life – to us filth is beautiful and a virtue. Our shows are just an extension of this.

What else have you got in store for 2011?
Several plans are brewing with a couple we want to keep close to our chests.. We’re going to hit those vulnerable towns across the country that we haven’t got to yet as well as causing trouble in London. Possibly a new CD by the end of the year and some work with video.

I would like to wish you the best of luck with all you do in the future!

I would like to wish you the best of luck with all you do in the future! Thank you for your time and also for you continued support with Basement Sound Records!