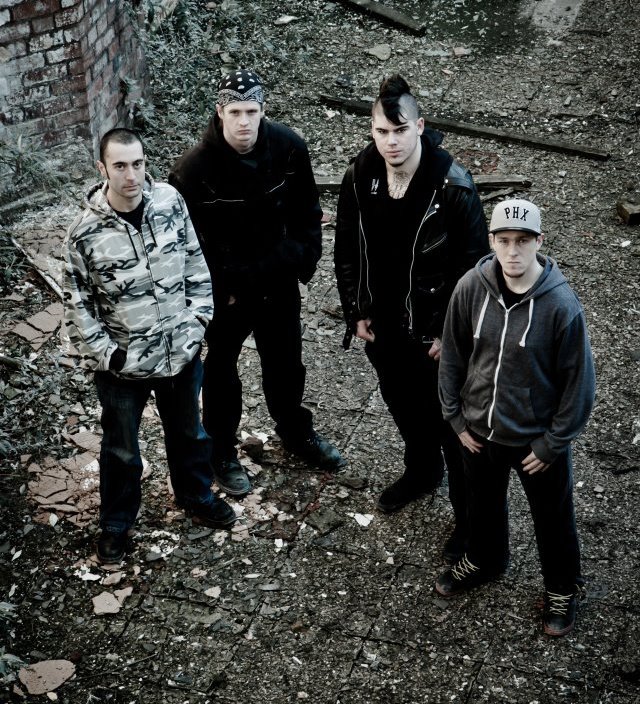 Our very own thrash Metallers, Reign Of Fear are hard at work..they have a new record which they are recording in September and will be headlining the first ever BasementFest on August 20 th. I asked them about their upcoming new release and their headlining show....
So your new record which your recording on September 10th, is to be named, "Blinded By Progression", how did you come up with this title?
The initial idea came from pete (drums) whos thinking was he doesn't want himself or the band to forget why we started out to be what we are today and to not become jaded or self absorbed and focus on the music and our personal relationships within the band instead of losing touch and becoming blinded by progression.
Is it to be a full length record? And how does the new material compare to that of your previous tracks?
B.B.P is to be a full length record which is a new experience for us but at the same time we have been writing for this release for quite some time now, we are now a four piece band as a apposed to a 3 piece as we have been for the last 6 years so it's a more sonically enhanced record and there are defiantly more solos, and lead breaks aswell as a wall of guitars which we have wanted for many years, so in that regard it's a more defintive representation of R.O.F.
Are there any noticeable differences in sound on the new record?
Yes Absolutely, this time around we have been recording demo's which has allowed us major pre production time and therefore before entering the studio we can analyze and scrutinise our material and ensure we have everything firmly in place. Whilst at our HQ we try out so many different ideas for each song which is great as we can experiment and try all the guys ideas which is satisfying.

Will you be performing any of your new tracks at BasementFest on the 20th of August?
Well as we are headlining the day slots we thought we would air a couple of the new songs for the crowd that night and they are 'Awakened' and 'march to war' its gonna be an awesome show that night and to be one of the headline acts at our labels event is an honour for sure

What can people expect from the new record?
The new record is essentially us cranked to 11 in the sense that its tighter more focused writing and thrashier than ever as well as being more brutal and a HUGE step up in technicality though we have simplified some aspects to make them a lot more melodic and musically tighter! We truly hope that the fans enjoy the new record and bang there heads!
Is there any particular lyrical theme? Or is each song to be treated as separate from the others, whist remaining coherent?
We have chosen to for the first have each member contribute lines here and there whilst Dougy remains the main lyricist which is refreshing as it allows a different outlook and input which is awesome! In regards to the lyrical theme it's a mix bag in some ways but there is a trend that runs through it such as the defiance, morality, loyalty as well aslong the airing of some truly painful memories and experiences, so in a lot of ways it the most personal and emotionally explicit we have ever been.
And lastly what are your own personal thoughts on your upcoming new record?
We are very proud to have been a band for 8 years and to have seen so many fall by the wayside and conform so this our statement of intent, so we are ultimately satisfied and believe in what we are doing more now than ever and its shows on this record, we are all playing above our best and by having more twin guitar action makes it all just so much more musical, so really we couldn't have a better record and we cannot wait to unleash this chaos on the masses,
a huge thankyou to you Carina and to all at BSR for the support and loyalty but mostly to our fierce supporters and anyone who has got behind us in any way without you we are nothing….RESPECT DUE!
http://www.reignoffear.co.uk/home.html
Carina