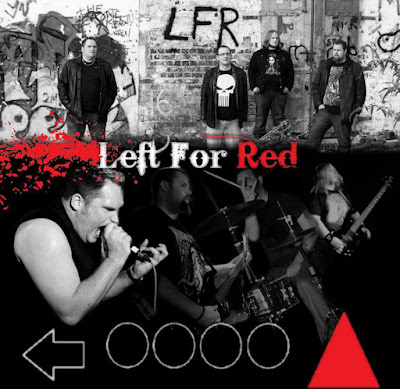 Left For Red are a four piece metal band from Dudley, UK. Their sound is a mix of punk, metal and rock. They have played many gigs with some of the best bands in West Midlands..and now they will be playing alongside the mighty Chimaira and Revoker on the 17th of March at the Slade Rooms in Wolverhampton.

I put some questions to bassist, Daniel Carter about opening for Chimaira, lives shows and the new EP due to be released this year..

Firstly thanks for your time. You must be pretty hectic right now, promoting and rehearsing, especially with the impending massive gig coming up?!

Yeah we have a really busy year coming up, we are working mainly on festival dates during the summer, so far we have been confirmed for Basement Fest 2012 which is going to be amazing with Blaze Bayley and Beholder headlining. We are also busy booking gigs hopefully for a UK tour during or at the end of the year.

I hear your working on a new set for the Chimaira show. How much are you going to change it up compared to your usual performance? Are you looking to pull off something special on the night to mark the momentous occasion?

We have moved the set around a lot and trimmed the fat; we now have a much faster, much heavier set which will hopefully get fans of Chimaira warmed up. We haven’t got anything planned as such but there will be a lot of energy drinks, coffee for before to get us pumped up and pain killers and beer for afterwards.
So how did you come to land this great opening slot?

We played the Slade Rooms last year with some of our friends Incendia, Disarm Goliath and She Screams Murder and we really got the whole room involved, it was one of our favourite gigs as a band so far.
How does it feel to know you’ll be playing with some massive bands? This must be a proud moment for you as a band?

It is incredible, personally I almost fainted when I heard as I have been listening to Chimaira since their first EP Present Darkness, they were also the first Metal band I went to see live and they are one of my favourite bands. As a band we are going through all the emotions we are excited one minute and then really nervous the next, it really is a proud moment for us as it just shows that our hard work over the last 2-3 years was worth it.

What is your favourite Chimaira song and why? What are you hoping to see on the set-list?

My favourite Chimaira song, it is hard to pick just one. It would have to be off Impossibility Of Reason as there isn’t a song I skip off of that album. I would say either Dehumanizing Process or Power Trip just for the pure brutality of Power Trip and the fact that I hear that song being played in a pub or club and I have to get up and head bang to it and The Dehumanizing Process, the first time I saw Chimaira live they did
a wall of death in the Wulfrun, I was only 16, I ran into this huge bloke and broke my nose, later on I went up to Jim LaMarca with blood pouring down my nose and I was hugging him saying “DUDE!!!! I love you!!!!! I BROKE MY NOSE IN YOU PIT!!!!!” As you can imagine he didn’t really know what to say to me HaHa!
Same goes for Revoker, what is your favourite song?

I have only really heard bits and bobs from Revoker which are mainly their singles. I really like The Great Pretender as it is a very catchy song and the riff really sticks in your head also ‘Stay Down’ kicks ass.

What is the best gig you have played so far and why? (I think I can predict the answer for this after the 17th March!)

We have 3 gigs that really stand out too us firstly Basementfest 2011 was awesome considering we were first on at 14:30 we had a great crowd and everybody got into it. Secondly our first Slade Rooms gig with (Incendia, She Screams Murder, Disarm Goliath and Exodus Calling) We sold loads of tickets and the room was heaving we had pits and everything lol! And Finally we played an All Dayer at The Flapper in Birmingham with our friends in Under Blackened Skies, Morgue Orgy , Viable Truth, Valous and Hostile which we really enjoyed as the weather was beautiful and there was all our friends and so much talent under one roof.


Any other exciting plans in store for the rest of 2012?..Hows the new EP coming along?

The new EP is coming along great so far we have 4 or 5 new songs and about another 4 or 5 coming along. We actually played our new song ‘Mercy Flight’ for the first time at the last gig and everyone loved it as it’s a mixture of a really heavy guitar riff and melodic vocals. The rest of 2012 hopefully Left for Red will be playing bigger gigs and making more friends from around the country and the world.

Wish I could make it to the show! Goodluck and kick some ass! Also I look forward to hearing the new EP when its completed!

To get tickets to the show on the 17th March visit: www.wolvescivic.co.uk