Here There Be Monsters Interview 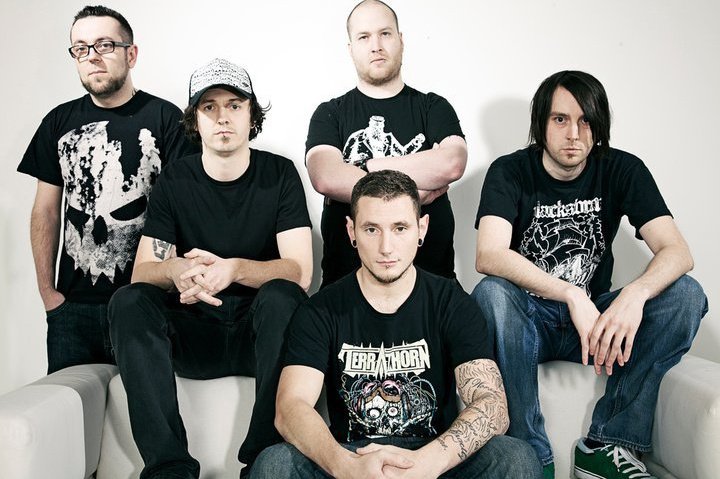 Here There Be Monsters are a Brighton based Groove Metal/Hardcore band that formed in 2007. I had the pleasure of seeing the band live myself last year, and they put on a great and energetic show, so I’m looking forward to seeing them again at the Hydrant in Brighton on the 4th of August 2011, supporting a band I have been a big fan of for a few years now..Exit Ten who are playing at Sonisphere! I asked frontman, Anthony Giles about this exciting upcoming gig, live shows and future plans…

How does it feel to be supporting a band like Exit Ten? Are you a big fan of the band yourself?
I am stoked to be doing this gig. Its a bit of a departure from the scene we are normally thrown in with, which tends to be of the more death metal and thrash/hardcore style, but we are really happy to be branching out and playing with some new bands. Personally, I love the melody that Exit Ten bring to a heavy backdrop of rhythms and guitars, it reminds me of some class bands I grew up listening to alongside the Slayers of this world!
2)What has been the best gig you have played and why?
After our Hulk Smash tour last year we packed out the Hydrant in Brighton as a final gig. On the night we showcased tour footage we had filmed, and there was just a really great atmosphere. Other then that, there have been a couple of gigs at Hectors House in Brighton that have gone mental, and a recent gig at Tunbridge Wells Unfest was ace – really small dingy basement gig, loved it! I know that’s more then one, but that’s a tough question...
3)What is the biggest audience you have played too?
About 500 people
4)How would you describe your live performance? What can people expect?
Energy! Basically, we really love playing music as a band, and I think that this really comes across in gigs. People dig it because we mix up tempos from fast beats to groove beat downs - lots of movement and loud, savage music.
5)I read that you have new songs coming in July?..What can we expect to hear and would you say they are in keeping with your current material or going in a new direction?
Our current set is definitely the sound I think we have been aiming for over the years – and the new material reflects this. We have one song called ‘EN.D.U.R.E’ that is being introduced to the set – which I think has one of the best beat down end sections we have written – a real homage to some of our favourite bands but in our own style. To be honest, because of the recent addition a few months ago of Andy (Parker, 2nd Guitar) and Tim (Herring, Bass), even the old tunes sound new because of the extra parts and complexity we have added
6)Any other big plans for the year? (Other than supporting Exit Ten!)
We have a gig supporting Black Breath from the states (who are awesome), as well as putting on our own all day shows, trying to bring some out of town bands in to Brighton to play some gigs with the local acts. We are also currently planning a video, we just need to decide which tune to use!
7)Are you attending any festivals this summer? If yes, who are you most looking forward to seeing?
Sonisphere! Too many bands to name all of them, its  great line up, but I mainly want to see Mastodon, The Black Dahlia Murder and Bill Bailey. Oh, and Exit Ten and Black Breath who are both on the bill also.
Thank you for your time! I look forward to seeing you guys again!