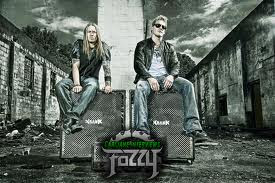 So I was given the amazing opportunity to do a phone interview with Chris Jericho, WWE Superstar and Frontman of Heavy Rock band, Fozzy.

Fozzy are beginning their Summer Tour on the 2nd of June, starting in Canada, New York, then heading over here, doing 6 UK dates, including Sonisphere on the 10th of July, as well as Europe on their biggest tour yet!

I spoke to him while he was in Los Angeles about the upcoming tour, particularly about playing one of the biggest Metal festivals in the UK, Sonisphere.

I asked him if he was excited about coming back here and he responded, “I’ve always considered the UK to be like a second home to us, which is why we spend so much time touring over there. Our fan base just keeps getting bigger and bigger, there's a lot of demand for the band, so we always want to come back and we love playing there. Sonisphere is going to be one of the biggest gigs we have ever had. It’s kind of a reward and to our fans in England, if it wasn't for the fans, we never would have got on the Sonisphere bill”.

I pointed out that playing Sonisphere must be like a highlight of their music career..Chris said, “Absolutely, We’ve been doing Fozzy for 12 years, and I've been playing in bands since I was twelve years old so..” and went on to say about the Big Four and sharing the bill with Metallica, Motorhead, Anthrax and how “It’s very gratifying”, to not only share the stage with some of his favourites bands but he said also he’s just “a big fan of playing festivals. It didn't matter who was on the bill, the fact that its professional bands makes it more sweet for us”.

I wanted to know how their festival performances differed from their regular shows, Chris replied with, “Well there's always a different vibe at festivals, because at our own shows fans kind of have a little more control, but at the festivals, there's a lot of people which have never seen us which is good in a lot of ways ..we take a lot of pride in the fact that were a very entertaining live band, and people always have a great time when they come to the shows and its one of the reasons we do so well in England” and says he is “so excited to tear the house down” for the festival. Also, “Spread the word to people who have never heard of the band” and that they’re there to “Kick our ass..” (Something he is very good at quite literally!)

I tried to get the scoop on any festival exclusives or surprises they had up their sleeves for the festival. With which Chris replied, “we put a shit lot of energy into the show and make sure everyone has a great time..
..”Anybody who has ever seen Fozzy live has had a great time..Its one of the things that we are known for, our reputation for that is growing, and getting bigger and bigger..”

“..We are excited about this tour as we are going to a lot of countries we have never been to before, not just England..France, Germany, Netherlands, Denmark, Switzerland, Belgium, so we're going to be all across Europe, touring with Anthrax with a lot of those shows, so it’s a huge tour for us in a lot of different ways, and we're really looking forward to it”.

On their official site, http://www.fozzyrock.com/ the band done a video blog tour for the UK/France tour last year, so I asked if this is something they would do again this time round..”Yeah we're probably do that, we like to do little videos, so people can see what's going on. We have a really good time with the VIPs that come to our shows, we do something different. We have people come and eat dinner with us, see our sound check, so we like to put up little video clips of that, so people know what to expect when they come to VIP..It’s a good way to let people know what's going on and get closer to the fans, and take advantage of twitter and the internet, to really promote what we're doing and get a behind the scenes look at what's going on, on the road, and I think fans relate to that and enjoy that”.

I asked if he had any crazy or funny UK fan stories...

I thought I would let Chris give a message to the UK fans. So here it is...

“Just that we're really excited and honoured to be coming back over there, and not just for Sonisphere, but to London, Camberely, Nuneaton, Margate, Manchester, we got a nice little tour set up, and that's totally because of the fans, that keep wanting to see us, and that's why we keep coming back..we're continue coming over, continue to keep seeing everybody. And if you guys want to see us play, we will play a couple of new songs in the set, so it’s going to be a blast as always”.

On the Summer Tour Poster it says there are more dates to be added, so I tried to find out more about these extra dates...Chris said he, “I think that's pretty much all the dates, there might be one or two more in Europe, “in the Germany, Netherlands type area” and that they “will have to be announced pretty soon, as the tour is coming up in 6/7 weeks”. So keep a look out for those dates soon on their site, http://www.fozzyrock.com/

If you haven't witnessed the band live yet yourself you can get an idea of their performances in their video for, “Let The Madness” begin, which was filmed on their UK tour last year in May! http://www.youtube.com/watch?v=GFwzNrBj02I

Fozzy are playing Sonisphere on Sunday the 10th of July on the Jagermeister Stage: http://uk.sonispherefestivals.com/